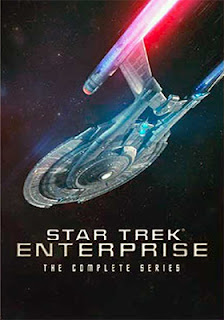 Paramount Home Media has selected Jan. 10 as the street date for Star Trek: Enterprise - The Complete Series, a massive 27-DVD disc set featuring all 98 episodes from the series four-year run.

Scott Bakula stars as Capt. Jonathan Archer, the skipper of the Enterprise NX-01, a forerunner of the Enterprise that Kirk and Spock would inhabit a century later.   His ship can only achieve Warp Five, which means it takes much longer to get from place to place in the Milky Way.

Other elements in this “prequel” series include the formation of The Federation — the introduction of Vulcans, Romulans and other alien species to Star Trek canon.