Pop Twist Entertainment Tags Dec. 13 For The DVD Debut Of The Ecstasy Of Isabel Mann 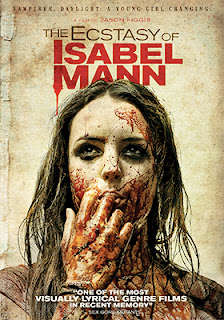 This Irish import toplines Ellen Mullen — also appearing in Figgis’ Children of a Darker Dawn (aka: Railway Children) — as an aliened teenager who manages to escape an assault in the nearby woods as the film opens.   Bloody and bruised she makes it home and we are initially left to ponder what might have been the cause of her assault.

As film progresses we learn that several of her classmates have gone missing and that a no-nonsense detective (Neill Fleming) has been assigned to the case.   It is through his investigation — assisted by his “leg-man” (Matthew Toman) — that we begin to understand that there is a lot going on in Isabel’s life (perhaps “life” is a poor choice of words) than we initially suspected.

Mother dead, raised by her father, troubled teen … etc., etc.  Experimenting with sex and drugs, sure it’s all there, but — and here’s the surprise — it seems she’s become a “daywalker,” a blood-sucker being trained by Alejo (Karim Elgendy), a vampire. 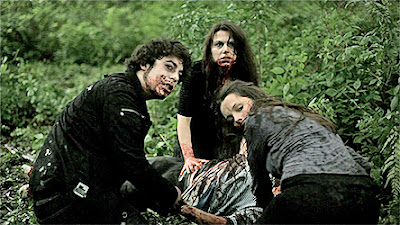 She is progressing quite nicely from a novice to a killer, who is now under the microscope of the law.   But there’s one other little secret that remains to be uncovered and that one hits very close to home! 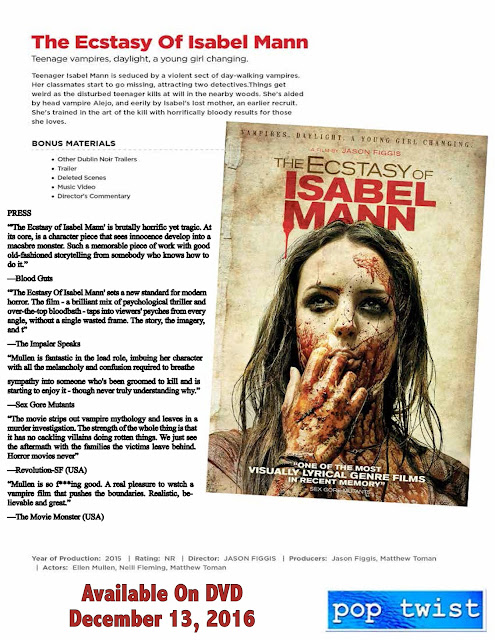 Email ThisBlogThis!Share to TwitterShare to FacebookShare to Pinterest
Labels: DVD and Blu-ray Release Report, Pop Twist Entertainment Tags Dec. 13 For The DVD Debut Of The Ecstasy Of Isabel Mann