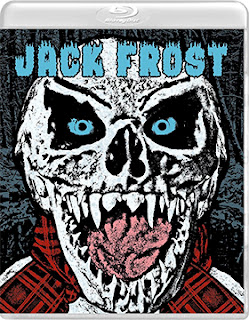 Vinegar Syndrome surprised everyone this past week with news that director Michael Cooney’s 1996 Christmas-themed horror tale, Jack Frost, will be given a limited edition Blu-ray/DVD Combo Pack push on Dec. 13.

This newly minted 2K restoration — from original 35mm film elements — stars Scott MacDonald (Fire in the Sky, Jarhead, etc.) as the notorious serial killer Jack Frost, who escapes — on the night of his execution — and makes good on his vow to visit vengeance upon Sheriff Sam Tiler (Christopher Allport — To Live and Die in L.A.), the man who captured him!

Only there’s a twist, Jack seemingly died during the escape when a tanker truck full of some sort of “acid” crashes and dumps its contents on the killer, melting him in the process.   So is it Jack Frost on this latest killing spree … or is it someone else, perhaps even the Sheriff?   Or, is there something else even more sinister going on!

Bonus features include commentary with director Michael Cooney, who also provides a video introduction to the film, plus there are two video sessions featuring Scott MacDonald and cinematographer Dean Lent (Border Radio, The Dogwalker, etc.).