When Comedy Was King Restored For DVD By The Sprocket Vault 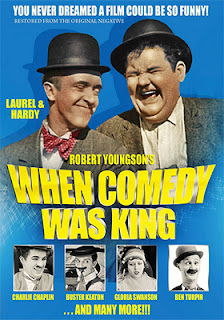 The Sprocket Vault has made available to DVD a remastered presentation — from the original 35mm negative — documentary filmmaker Robert Youngson’s 1960 film tribute to comedians of the Silent Era, When Comedy Was King.

This vintage theatrical presentation (coming up on 57 years) took a loving look back at the great screen comedians that starred before films found “their voice” … it was all visual back then, ranging from sight gags to clever storytelling twists.

Email ThisBlogThis!Share to TwitterShare to FacebookShare to Pinterest
Labels: DVD and Blu-ray Release Report, When Comedy Was King Restored For DVD By The Sprocket Vault