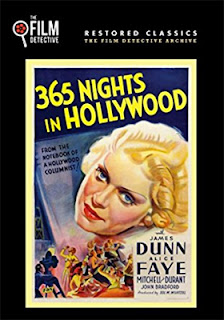 The Film Detective has a pleasant surprise for film buffs and collectors in general this past week with the release of a dozen new films restorations on DVD.

Leading the way — and that is always very subjective — is director George Marshall’s Christmas of 1934 film release of 365 Nights in Hollywood.   Starring songstress Alice Faye in one of her early film roles (filmed and released in the same year as George White’s Scandals (her film debut), she plays the role of newbie actress (a remarkable resemblance to Jean Harlow, who was at the peak of her career about this time) who enrolls in a phony acting school.   There she meets Jimmy (James Dunn) and the two manage to outwit the proprietors of the school — something of a forerunner to the type of films that Mickey Rooney and Judy Garland would perform in at MGM within a few years. 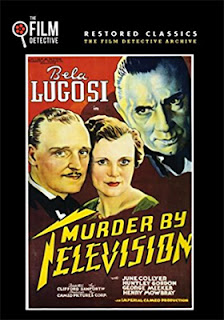 From the same year, 1934, comes director William Nigh’s romantic mystery, Monte Carlo Nights, teaming Mary Brian (Man on the Flying Trapeze, Charlie Chan in Paris, Affairs of Cappy Ricks, etc.) with John Darrow, who is a man, wrongly convicted, on the run who finds help from an unlikely source in bringing the real killer to justice.

In 1935 director Clifford Sanforth delivered an indie mystery with the odd title (for the period) of Murder by Television.   A professor (played by Charles Hill Mailes) invents major improvements to television broadcasting and everyone is out to get it!

On the night of the first presentation of his new invention he is murdered and Police Chief Nelson (Henry Mowbray) locks up everyone in the creepy old house (the murder scene) until he can crack the case.   June Collyer plays the professor’s daughter and none other than Bela Lugosi is one of the suspects! 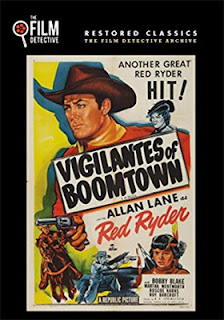 Westerns?   If you are a Western fan, then this Jan. 17 package from the Film Detective has you covered.   Included in the mix are: The Driftin' Kid (1941, Starring Tom Keene and Betty Miles, with “Rusty the Wonder Horse); Red Ryder rides in Vigilantes of Boomtown (1947, with Allan Lane as Red Ryder and Robert Blake as his sidekick, Little Beaver); Wagon Trail (1935, starring Harry Carey and Gertrude Messinger, with “Sonny the Marvel Horse”) and Water Rustlers (1939, with Dorothy Page and Dave O’Brien … Stanley Price is the villain).

Rounding out the film restorations in this group are: My Dog Shep (1946, Lanny Rees — who played Junior Riley in The Life of Riley television series — stars as a runaway orphan whose only friend is a stray dog); Sunny (1941, Anna Neagle stars under the Big Top); Hollywood: My Home Town (1965, vintage Hollywood home movies … hosted by Ken Murray); Garden of Eden (silent 1928, starring Corinne Griffith and Charles Ray with direction by Lewis Milestone) and Fangs of the Wild (1939, starring Rin Tin Tin, Jr., with human actors Dennis Moore and Laura Walters).