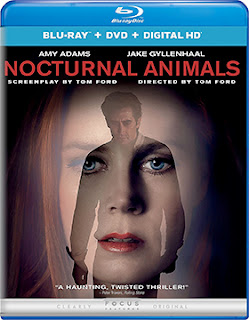 Universal Pictures Home Entertainment announced this past week that writer/director Tom Ford’s film adaptation of Austin Wright’s 1993 novel “Tony and Susan,” which journeyed a long-and-winding road to the screen as Nocturnal Animals.

This often-violent story within a story teams Amy Adams with Jake Gyllenhaal and will be available as both DVD and Blu-ray/DVD Combo Pack product offerings on Feb. 21.

The ARR works out to 95 days and box office receipts were $10.6 million.

The release appears to be timed to take advantage of the Oscar buzz for Amy Adams in the Best Actress category — almost a sure bet nomination for her performance in Arrival.   We shall see on Tuesday, January 24, if this is a winning strategy for a film that underperformed theatrically (considering the star power).

Bonus features are a three-part making-of production featurette  — “Building the Story,” “The Look of Nocturnal Animals” and “The Filmmaker's Eye: Tom Ford.”