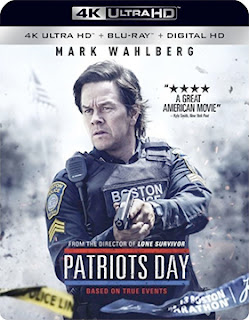 It joins the previously announced release of filmmaker Mike Mills’ 20th Century Women on that date, and with Disney selecting Apr. 4 as the street date for Rogue One: A Star Wars Story, the next available window for Lionsgate’s La La Land looks to be Apr. 11.

The ARR for Patriots Day works out to 95 days and ticket sales were a little disappointing at just $31.5 million.

The theatrical group for Lionsgate selected a platform release strategy of just seven screens during the Christmas through New Years period (3 full weeks) and then elected to widen it out to just over 3,000 screens in mid-January.   By that time the bloom was off of the rose (so to speak).

More and more it appears that traditional theatrical release strategies of the past are falling victim to digital and on-demand platforms — consumable media on an “eye-squint” machine (what’s the point of widescreen hi-def in that viewing environment).

There is some pretty compelling anecdotal evidence that consumers prone to this type of entertainment consumption are more than ready to skip ahead to digital platforms if they can’t get to a theatrical screening of any particular film during its opening weekend.   If Patriots Day is only playing in seven venues nationwide during the first three weeks of its theatrical run, it seems likely that the low attention span segments of the potential audience have already moved on if their entertainment needs can’t filled in the here and now.

There were several examples over the holiday period that absolutely tanked with the platform theatrical release strategy.   So it is go-wide out the gate or find another date if all of the venues (screens) are spoken for … that looks like the dynamics of the market place going forward.

In any case, Lionsgate Home Entertainment will have no trouble finding an audience for this story about the cowardly terrorists who set off two pressure-cooker bombs during the running of the Boston Marathon on Apr. 15, 2013, killing three innocent bystanders and maiming an additional 17 (plus close to 300 other injured).   They subsequently murdered Sean A. Collier (played in the film by Jake Picking), an MIT police officer, before being hunted down.

The film itself focuses on the activities of a “composite” character named Sergeant Tommy Saunders (played by Mark Wahlberg) of the Boston Police Department, who represents a number of Boston’s finest who were involved in the series of events that began on the day of the bombing and continued up to the capture of the surviving terrorist four days later. 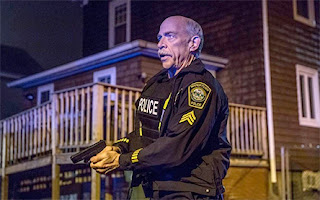 Another important character in the film is Watertown Police Department Sergeant Jeffrey    In a number of published interviews with Pugliese, he confirms that his scenes involving the Watertown shootout with the brothers are extremely accurate (he was on the set with filmmaker Peter Berg during the production).  So too is the carjacking sequence involving Dun Meng (played by Jimmy O. Yang).
Pugliese (played by J.K. Simmons), who is a real person.

Bonus features common to all release SKUs are the featurettes titled “Boston Strong: 3 True Stories of Courage” and “Researching the Day.”   Exclusive to the Blu-ray and 4K Ultra HD/Blu-ray Combo Pack editions of Patriots Day are a two-part presentation of “Actors Meet Real-Life Counterparts” and three additional featurettes — “The Boston Bond: Recounting the Tale,” “The Real Patriots: The Local Heroes' Stories” and “The Cast Remembers.”