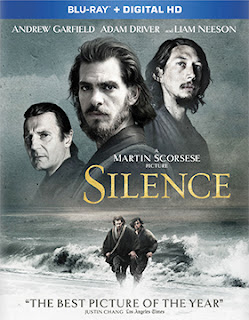 Paramount Home Media has tagged Mar. 28 as the street date for the delivery to retail of both stand-alone DVD and Blu-ray/DVD Combo Pack editions of auteur filmmaker Martin Scorsese’s emotionally-charged Silence.

The ARR is 95 days and box office receipts currently stand at $7.1 million.

With hits such as Taxi Driver, Raging Bull and Goodfellas (among others), eight Oscar nominations for Directing (with a win for The Departed), plus four other nominations for either producing or writing, Martin Scorsese has the credentials to do pretty much anything he desires in terms of filmmaking.

Silence is such a “desire” … it took awhile for him to return to the religious theme (remember the 1988 film release of The Last Temptation of Christ) as the center of one of his films, although nearly all of his films touch upon guilt and redemption in one way or another (character flaws; character traits).

His source material is Japanese writer Shūsaku Endō’s 1966 quasi-historical novel, “Silence,” which was first adapted for the screen back in 1971 by Japanese filmmaker Masahiro Shinoda and titled Chinmoku (Japanese for silence).  Endō took actual historical figures and adapted them to a dramatic retelling of events.

As background, Japan was a closed culture to the West once it was “discovered” in the 16th Century, but that didn’t keep the powers of the day, the Dutch, the Portuguese and the English from trying to crack the culture and potential rich bounty of trade.   Indeed, it wasn’t until 1854 when Commodore Perry forced opened the doors of Japan to the West that the country’s self-imposed isolation would come to an end. 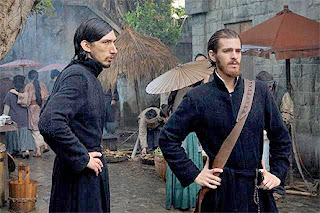 An early Western influence in Japan during the 16th Century were the Portuguese Jesuits, who had another bounty in mind beyond trade, the bounty of souls and the introduction of Christianity to the divided island nation.   Silence tells of these events and the eventual clash of cultures that forced Japan to take ruthless measures to eradicate these seeds of faith sown by the Jesuits.

The only bonus feature, which is limited to the Blu-ray edition, is the featurette titled “Martin Scorsese’s Journey into Silence.”