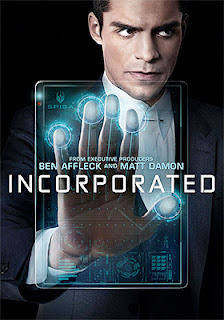 Paramount Home Media announced this past week that the futuristic dystopian series, Incorporated, will be heading the DVD arena on June 20 as a three-disc collection.

This short-lived series, starring Sean Teale (in a dual role), Julia Osmond, Allison Miller and Eddie Ramos, takes place in a dysfunctional future (circa 2074) where corporations have taken over for governments and the world is divided into green and red zones.   All ten episodes are included here.

Also on the TV series front on June 20 is the double-disc DVD presentation of Workaholics: The Final Season (the complete series will also be offered on that date).   Bonus goodies include deleted scenes, outtakes and a pair of featurettes — “The Last Shot” and “Wrap Reel.”

And rounding out the DVD product offerings from Paramount Home Media on June 20 is the Stephen King inspired series, Under the Dome: The Complete Series … all three seasons are spread over three discs (all 39 episodes).

Last week, Paramount announced that the five-disc DVD collection titled Stephen King Triple Feature would be released on June 13.   This set includes The Stand, The Langoliers and Golden Years and Paramount is clearly timing these two Stephen King promotions to take full advantage of the media buzz surrounding the theatrical releases of The Dark Tower on Aug. 4 and It on Sept. 8.