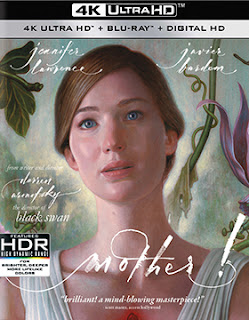 The ARR works out to 95 days and box office receipts were $17.8 million.
Planned for distribution are a DVD edition, a Blu-ray/DVD Combo Pack and a 4K Ultra HD/Blu-ray Combo Pack.

Is mother! a horror film, wrapped in insanity?   An allegory, where you must ferret-out what each character represents?   A Felliniesque tale of the bizarre?   All of the above … none of the above!

If you are into the cinema of Alejandro Jodorowsky, David Lynch, Federico Fellini and Guillermo del Toro (among others), then Darren Aronofsky’s mother! will be a visual feast; you will be right at home   And it is … a visual feast.

Jennifer Lawrence is “mother” and she lives in a picturesque, but remote, home that appears to have been recently burned, or perhaps even destroyed.   She shares this home with “Him” (Bardem’s character), who magically restores it with some sort of crystal.   Lawrence sets about to refurbish the house and it is beautiful.

One evening “Man” arrives (played by Ed Harris) and Bardem invites him to spend the night, which sets Lawrence’s character on edge.   The next day “Woman” shows up at the door (Michelle Pfeiffer) and she too is invited in by Bardem’s character. 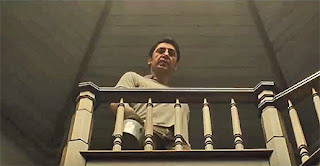 Without giving too much away — and it is really left to the viewer to interpret what is taking place — more people arrive, things get very bizarre and “mother” becomes increasingly unhinged.

Bonus features, which are limited to the Blu-ray and 4K Ultra HD SKUs, are two production featurettes — “mother! The Downward Spiral” and “The Makeup FX of mother!” 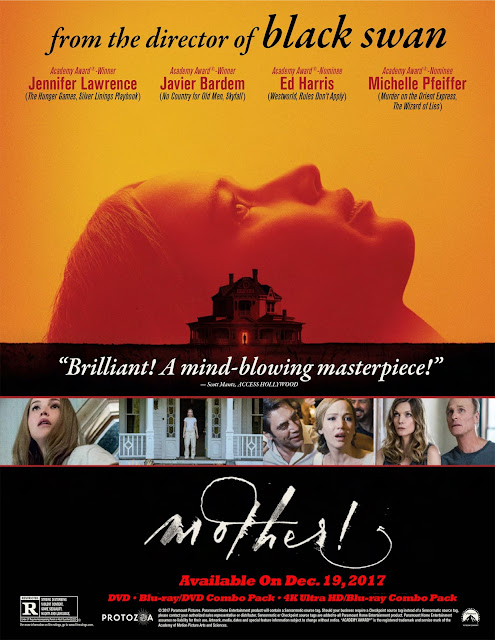