Cleopatra Music And Films Tabs Mar. 13 For The DVD Debut Of Writer/Director Xander Robin's Are We Not Cats 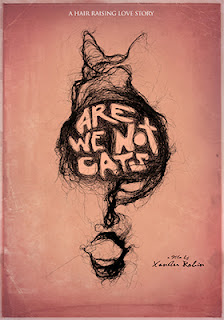 This is a story that David Lynch, David Cronenberg or Tim Burton might spin, which is good, very good.   The one that filmmaker Xander Robin has constructed is a strange love story that is as creepy as it is, at times, sweet.

The film in question, which is based on his award-winning short film of the same name, is Are We Not Cats.   Cleopatra Music and Films, with sales and distribution expertise provided by MVD Entertainment Group, has picked Mar. 13 for the DVD launch of this one-of-a-kind tale (oops, is that a cat pun?).

It’s winter, it’s New York and Eli (Michael Patrick Nicholson — We are Still Here) is a sad sack of a thirtysomething who has just been dumped by his girlfriend and just as quickly rendered homeless when his parents inform him that they’ve sold their home and are moving to Arizona.

Now it is not all bad news, he’s been left a delivery truck and soon uses it as both a place to sleep and a source of income by making, well, deliveries.   There’s a metaphor in here somewhere about delivering oneself to your own nightmare, but let’s not dwell too much on that.

In any case, Eli gets a delivery gig to a remote spot in upstate New York and there he meets the client, Kyle (Michael Godere), who takes him out “clubbing” and hook-up with the woman of his dreams, Anya (Chelsea Lopez — Phoenix Forgotten), who takes a shine to the scruffy Eli.   With no home to return to, Eli decides to settle down locally and perhaps make a go of it with Anya. 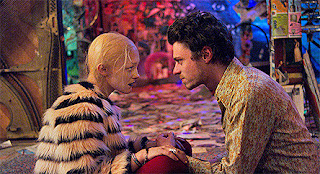 It turns out that both are afflicted with very similar “malfunctions” … Eli suffers from trichotillomania (seriously, there is such a thing), which is the repetitive behavior of pulling out one’s hair — look closely in the early scenes of the film and you will see the telltale signs.   Anya also has a hair issue, which is called trichophagia, and it is all about consuming one’s hair.

They have sex, they are in love, but he awakes to find that she had the munchies and consumed his entire head of hair!!!   Oh boy, we told you right up front that this love story was strange … Are We Not Cats is a one hair-raising tale that delivers equal portions of squirmy horror (gut-twisting), humor and romance. 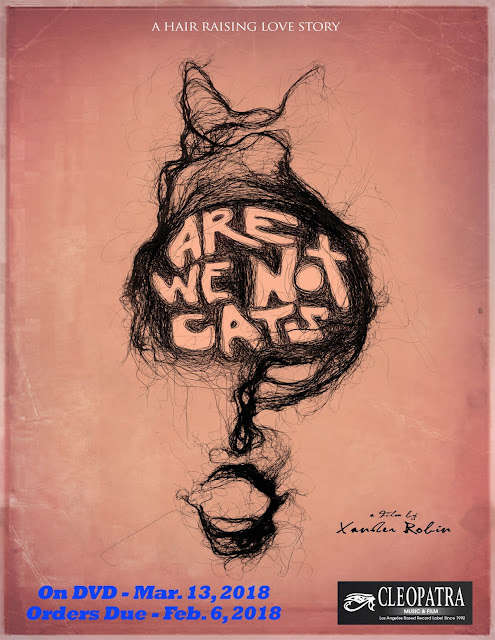 Email ThisBlogThis!Share to TwitterShare to FacebookShare to Pinterest
Labels: Cleopatra Music And Films Tabs Mar. 13 For The DVD Debut Of Writer/Director Xander Robin's Are We Not Cats, DVD and Blu-ray Release Report