Paramount Home Media Selects Apr. 3 For The DVD Debut Of 13 Reasons Why: Season 1 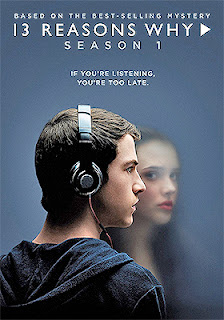 Paramount Home Media announced this past week that the Netflix series, 13 Reasons Why: Season 1, will be making its DVD debut on Apr. 3 as a four-disc set featuring all 13 episodes.

Golden Globe nominee Katherine Langford plays Hannah Baker, a high school student who had committed suicide two weeks earlier, becomes the focus of an impromptu investigation when one of her fellow students, Clay Jensen (Dylan Minnette — Don't Breathe, Let Me In, etc.), receives a mysterious box containing a series of audio cassettes from Hannah.    He begins to explore the reasons for her taking her own life, which are played out in a series of flashbacks.

Bonus features for this critically-acclaimed series (which has been renewed for a second season) include seven production featurettes — “Hannah & Clay: An Unfinished Love Story,” “Justin Foley: Not Your Typical Jock,” “Discovering Jessica Davis,” “Bringing the Book to Life,” “13 Things About Me: Dylan Minnette,” “13 Things About Me: Justin Prentice” and “Beyond the Reasons.”