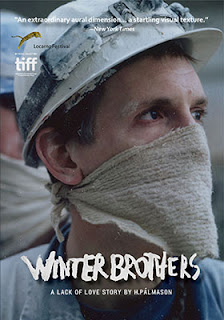 Hlynur Pálmason’s Winter Brothers (his debut feature-length film) was launched at the Locarno Film Festival in August of 2017 and then began a parade of win after win as it rolled along from one festival showcase to another.   The international march of screenings was accompanied by rave responses from both the audiences in attendance and the film critics who caught the various screening. 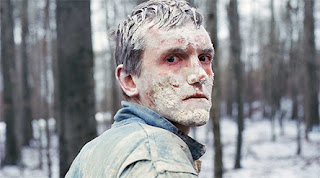 Hlynur Pálmason, born in Iceland, but now living in Copenhagen, is an artist by trade who has taken to the medium of film with the view of an artist.   That becomes clear from the get-go as the location for Winter Brothers is nothing short of foreboding, chilling … a remote limestone mine in some forgotten corner of Denmark.   Filmed in color, but you can imagine the isolation of Bergman’s The Seventh Seal or Shame as the touchstone for such a place.

It is here, in this dusty, noisy and bone-chilling locale that we are introduced to Emil (Elliott Crosset Hove), a miner who seems to be better suited for loafing about, brewing hooch or living out his visions of fancy.    He clearly doesn’t fit.

We also meet his brother, Johan (Simon Sears), who is every bit the image of a miner, and Emil’s only real friend, but that will that be tested. 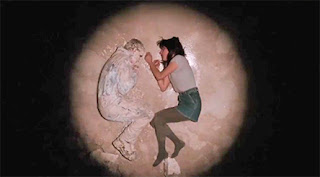 To say that Emil is not quite right is an understatement and as the film progresses we get an uneasy feeling about him … think: fingernails being drawn across a chalkboard.    Indeed, Elliott Crosset Hove’s performance as Emil is nothing short of riveting — creepy riveting — and like a bloody auto wreck along a busy thoroughfare, we must slow down to take a look.

Winter Brothers is presented in Danish with English subtitles. 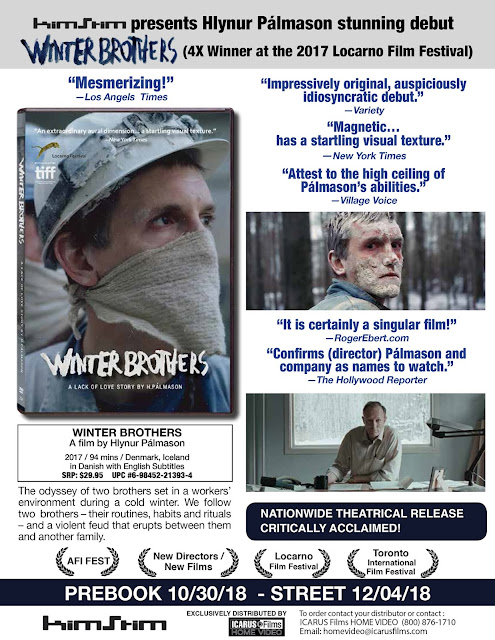