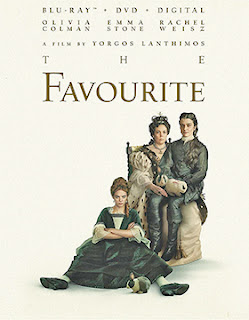 20th Century-Fox Home Entertainment announced this past week that the Best Picture nominee, director Yorgos Lanthimos’s The Favourite, will be available as both DVD and Blu-ray/DVD Combo Pack product offerings on Mar. 5.

Bonus features are limited to deleted scenes and the featurette titled “The Favourite: Unstitching the Costume Drama.”
Posted by DVD & Blu-ray Release Report at 5:46 AM