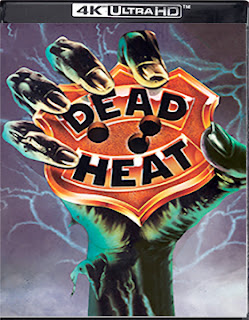 Piscopo and Williams are police detective who stumble upon a re-animation scheme (similar to director Edward L. Cahn’s 1955 classic sci-fi film, Creature with the Atom Brain) where dead criminals are brought back to life to pull off unstoppable robberies — they are already dead, killing them is next to impossible.

The opening shootout at a jewelry store brings this to light when coroner Rebecca Smythers (Clare Kirkconnell) examines the “dead” robbers and realizes that she had previously performed autopsies on them.   This information leads Mortis (Williams) and Bigelow (Piscopo) to Dante Pharmaceuticals where they meet Randi James (Lindsay Frost), the “daughter” of the company’s “dead” owner, Arthur P. Loudermilk (played by horror icon Vincent Price), and discover the “resurrection machine” … which is being used to bring the dead back to life.

It is here that everything gets turned upside down.   Mortis is killed, the machine is used to bring him back to life, but he may only have a short time to solve his own murder before time runs out on his zombie body. 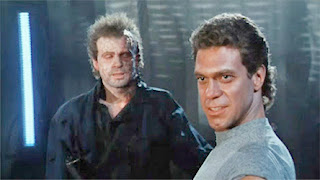 Who is behind this crime wave?   Will Mortis, and his partner, Bigelow, solve the mystery before time runs out?   Jan. 25, in case you don’t already know, for the 4K Ultra HD debut of Dead Heat to discover the solution!!

There are also deleted scenes, the vintage featurette titled “Dead and Alive,” plus five newly-prepared featurettes — “The Building Blocks of Movies,” “A Thousand Feet of Lightning,” “Seizing the Opportunity,” “How to Edit for an Editor” and “Happy Accidents Happen.”