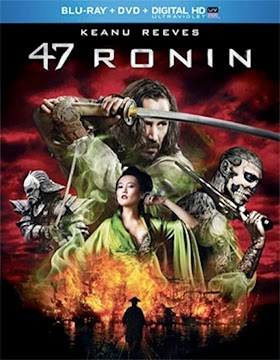 Universal Studios Home Entertainment will serve up a three SKU helping of director Carl Rinsch’s 47 Ronin this coming Apr. 1.   Included in the mix are a stand-alone DVD release as well as two Blu-ray/DVD Combo Pack SKUs (one with a 3D viewing option and one without).

The ARR is a quick-to-market 95 days and the domestic box office gross was $38.3 million.

Bonus features for this Keanu Reeves and Hiroyuki Sanada feudal Japanese Samurai flick include deleted scenes and the featurette titled “Re-Forging the Legend.”  Exclusive to the Blu-ray editions are three additional featurettes.