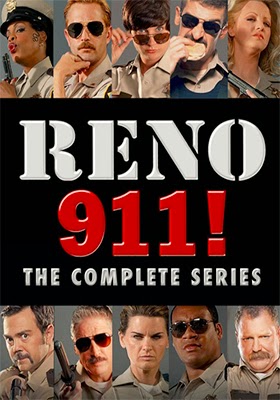 The most inept policing agency (and deliberately so) in the annals of law enforcement history were the men and women of the Reno Sheriff's Department.  Reno 911!, the satirical comedy series produced by Comedy Central, will be available on Nov. 4 — all 88 episodes — from Paramount Home Media Distribution in the 15-disc mega-pack titled Reno 911!: The Complete Series.

In addition to the complete collection of laugh-filled episodes, the set comes loaded with bonus goodies, including cast and director commentaries, extended scenes, outtakes, featurettes — “Cop Psychology: Inside the Minds of Reno's Deputies” and “Lt. Jim Dangle Explains Reno 911!.com” — mock-promos for action figures and uncut version of the “Tupperware for Tampa” episode.

Also on the Nov. release docket from Comedy Central is comedian Jeff Dunham’s latest special, which is derived from his recent “All Over the Map” tour.   On Nov. 18 there will be both Blu-ray and DVD editions of Jeff Dunham: All Over the Map available for fans to savor.

Yes, Achmed the Dead Terrorist — except in Malaysia (something about being culturally offensive) — joins Dunham on stage, along with everyone’s favorite, Walter, plus Peanut and Bubba J. also get in the action.   12 countries and 19 cities in in a little over a month on the road … and everyone had a great time, even the audiences in Malaysia!