Icarus FIlms' Master Of The Universe Arrives On DVD This Coming Nov. 18 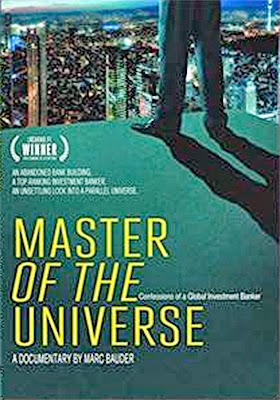 Icarus Films, in association with KimStim, has tabbed Nov. 18 for the domestic DVD release of German documentary filmmaker Marc Bauder’s Master of the Universe, a systematic dissection of the international financial markets.

If you want an insiders view of the world of finance, which is, quite frankly, a mystery to most, then there is none better than former German investment banker Rainer Voss.    Filmmaker Bauder set down with Voss — in a cavernous shell of a former financial house of power (it’s all a façade, get it) — to talk about the real “wolves of Wall Street.”   The culture, the greed … the manipulation are all fair game for discussion.

It could be a dull viewing, but filmmaker Bauder captures the surroundings and trappings of power (stunning cinematography), which is counter-balanced against Voss’ almost mechanical detailing of his rise and fall.

Presented in German with English subtitles.