Dumb And Dumber To Heads To Blu-ray And DVD On Feb. 17 Courtesy Of Universal Studios Home Entertainment 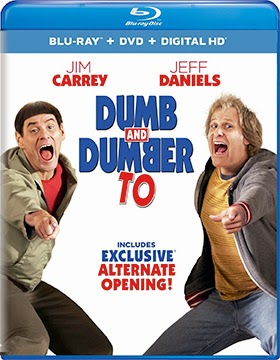 Universal Studios Home Entertainment takes the silly meter to an “11” on Feb. 17 with the comedy hit, Dumb and Dumber To, starring Jim Carrey and Jeff Daniels as Lloyd and Harry … the knucklehead brothers from a different mother who reunite for a third time (if you count that inane 2003 film, Dumb and Dumberer: When Harry Met Lloyd, which featured Lloyd and Harry … but not Carrey and Daniels).

The ARR for DVD and Blu-ray (with UltraViolet) editions is a zippy 95 days and domestic ticket sales were a solid $82.1 million.

Bonus nuggets here include a gag reel, an alternate opening sequence, deleted and extended scenes and a pair of production featurettes.

Email ThisBlogThis!Share to TwitterShare to FacebookShare to Pinterest
Labels: Dumb And Dumber To Heads To Blu-ray And DVD On Feb. 17 Courtesy Of Universal Studios Home Entertainment, DVD and Blu-ray Release Report