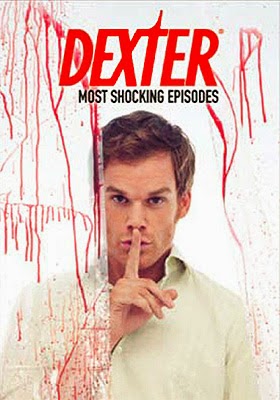 Paramount Home Media Distribution has tabbed Mar. 17 for the release of three TV-on-DVD themed multi-disc SKUs.  And they are an interesting assembly, especially for fans of two venerable series.

First up, it’s a three-disc, ten-episode collection titled Dexter: Most Shocking Episodes.   That’s right, in a series where also every episode had shock elements, Paramount will be working with Showtime to cull out the ten MOST shocking Dexter Morgan encounters.
Right now they are mums-the-word on which ten they’ve selected.

Next up on Mar. 17 is the double-disc, eight-episode DVD set titled Star Trek: The Original Series - Captain Kirk's Boldest Adventures.   One thing is certain, crew members of the Starship Enterprise going on away missions with their beloved captain, who just happens to be wearing different color uniforms, will not likely survive the experience.
Lastly, Mar. 17 brings to fans of the Jennifer Love Hewitt paranormal series, The Ghost Whisperer: The Complete Series … a whopping 29-disc collection!