VCI Entertainment's The Prowler Heads To Blu-ray On Feb. 3 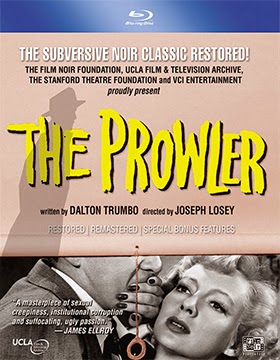 VCI Entertainment will be giving director Joseph Losey’s 1951 film noir thriller, The Prowler, a hi-def push on Feb. 3 with the release of a fully stored Blu-ray edition.

In keeping with the company’s recent look at marketing selective Blu-ray product offerings for the collector’s market this makes a quite a bit of sense.   This Van Heflin gem, co-starring Evelyn Keyes as the object of his twisted affections, in a film noir in the traditional sense and is one of those cult-like films that has grown in stature over the years, especially with none other than Dalton Trumbo as the screen writer.

Bonus features include commentary by film noir expert and author Eddie Muller (“Dark City: The Lost World of Film Noir”), three featurettes — “The Cost of Living: Creating The Prowler,” “Masterpiece in the Margins” and “On the Prowl” — and a photo gallery.

Email ThisBlogThis!Share to TwitterShare to FacebookShare to Pinterest
Labels: DVD and Blu-ray Release Report, VCI Entertainment's The Prowler Heads To Blu-ray On Feb. 3