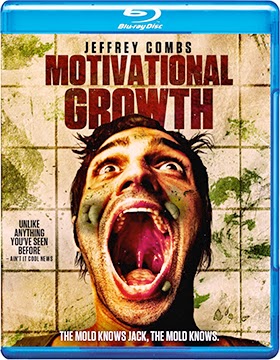 Parade Deck Films, with sales and distributional expertise provided by the MVD Entertainment Group, has a one-two horror punch ready for delivery on both DVD and Blu-ray.   One jolt in February … the second comes in March!!!

Ian (Adrian DiGiovanni) is at the end his rope.   His life is a mess.   The only thing in worse shape is his apartment (cleaning in not Ian’s long suit) and it is a place that he doesn’t seem to ever leave.   Yuck!

The breaking point comes when his only friend, Kent, dies.   That would be really sad for any normal human being, losing your best friend, but Kent was Ian’s television set.  So he retreats into his bathroom to kill himself and fails, only to awake to the voice of the mold creature (voice by Jeffrey Combs) that has grown un-checked in his bathroom.

Everything up to this point in Motivational Growth is just the warm up.   It’s Ian vs. The Mold … bring a barf bag, you’re gonna need it!!!

Bonus features include commentary from filmmaker Don Thacker, who is joined by actor Adrian Digiovanni and the voice of The Mold, Jeffery Combs, plus there is a making-of featurette and a photo gallery. 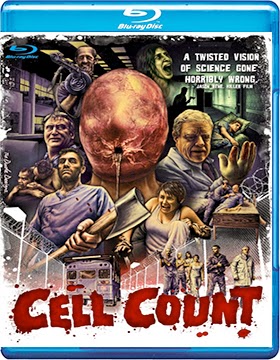 On Mar. 24 Parade Deck Films returns with filmmaker Todd E. Freeman’s Cell Count.
Sadie Carpenter (Haley Talbot) is dying and her husband, Russell (Robert McKeehen) is desperate to save her, but the doctors at the hospital overseeing her care give him little hope.   So it is only natural when the mysterious Dr. Victor Brandt (Christopher Toyne) shows up and says that he has a cure — and indeed, he’s even a “survivor” of the same unnamed disease — that Russell jumps at it, even if the treatment is “experimental!”  Yes, we will gladly go to your clinic.

If you’ve seen Vincenzo Natali’s The Cube, then you’ll readily identify with Sadie and Russell’s dilemma when they awake three weeks later — having been operated on — to find themselves trapped in “The Facility” with other patients and no clue as to where they are or what is going on.

At first their situation seems hopeful as Sadie seems to be better, but … and that is a very big “but.”   They mingle, at first untrusting, with the other patients and try to sort out what has happened to them and in doing so try to ferret-out Dr. Brandt’s real motivations.    Sadie’s cure, in this case, could be worse than her fatal disease … how could that be possible?   Cell Count answers that, in spades!

Bonus features include a behind-the-scenes featurette and filmmaker commentary.