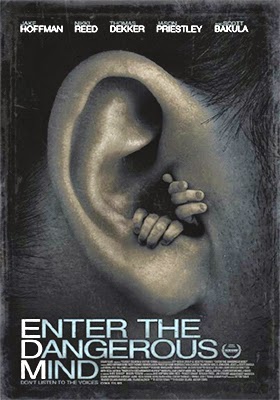 Well Go U.S.A. has captured the domestic distribution rights to writer/director Victor Teran and co-director Youssef Delara’s twisted thriller, Enter the Dangerous Mind.   An early February theatrical showcase run (for critical awareness outside of the film festival circuit) is planned with Blu-ray and DVD editions set to street on Apr. 15.

Jim Whitman (Jake Hoffman — The Wolf of Wall Street, 10 Years Later, Click, etc.) lives in the web-world of alternative music, which brings with it a loyal following.  To most it sounds like harsh noise … loud and in your face.   To Jim, it is somehow soothing, although with the meds he is on it is difficult for one looking in the “bell jar” to understand how that could be so.

Jake (Thomas Dekker — as John Connor in the TV series, Terminator: The Sarah Connor Chronicles) is his roommate, whose general purpose seems to be to get Jim out of his safe little shell (the apartment) and out into the real world.   That, as it turns out, is a mistake, which is compounded by Jake’s misguided, but well-meaning, take on women.

Oh, did we fail to mention why Jim, the alternative-music composer, is on drugs?   That becomes pretty apparent as Enter the Dangerous Mind progresses.   He meets a girl named, Wendy (Nikki Reed — perhaps best known as Rosalie in The Twilight Saga film series), who just so happens to like (love) his music.  She introduces him to the club scene (the wall of the web is broken) and it is all down hill from there (there are voices involved in the race to the bottom).

It is an overload for a schizophrenic … a safe environment with drugs is shattered with the real-world experiences of a woman, real fans and all of those voices in his head come together all at the same time.   You know those scenes with a timer clicking down to zero and then KABOOM!   That’s Jim!!!

Well Go U.S.A. invites you to settle in, get that seatbelt fastened really tight and enjoy this very bumpy (and dangerous) ride!
Posted by DVD & Blu-ray Release Report at 10:41 PM