Sony Pictures Home Entertainment Tabs Apr. 28 As The Street Date For DVD And Blu-ray Editions Of The Wedding Ringer 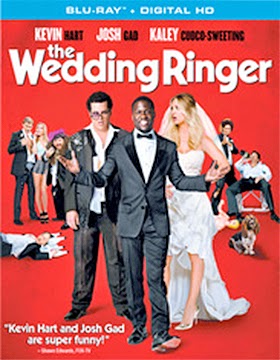 Sony Pictures Home Entertainment has selected Apr. 28 as the street for both DVD and Blu-ray editions of writer/director Jeremy Garelick’s debut film, The Wedding Ringer.

The ARR comes in at 102 days and domestic ticket sales currently total right at $63 million.

Doug (Josh Gad — Love and Other Drugs … as Steve Wozniak in the biopic Jobs) is a successful tax attorney, without close friends and has a trophy fiancée on the hook named Gretchen (Kaley Cuoco-Sweeting).    She is making elaborate plans for a big wedding and with just one look at Doug you know this wedding has as all the makings of a marriage made in hell.

But before we get to those endless years of pampered living and endless rounds of “honey, I have a headache,” Doug has to get through the wedding itself.   With no friends he has no best man and no groomsmen … what’s a man to do?

No problem, slick-talking Jimmy Callahan (Kevin Hart — Ride Along) provides the services to hard-luck grooms and Doug wants the full package — the “Golden Tux.”  That includes a best man and enough groomsmen to match the bride’s side of the aisle.   Eight strangers are about to become Doug’s life-long “best” friends … get ready for a fun ride, one that just may save his life!!!

Bonus features included "selected scene" commentary by filmmaker Jeremy Garelick and actor Josh Gad, a featurette, 15 deleted scenes and the Aloe Blacc music video, "Can You Do This."
Posted by DVD & Blu-ray Release Report at 12:58 PM

Email ThisBlogThis!Share to TwitterShare to FacebookShare to Pinterest
Labels: DVD and Blu-ray Release Report, Sony Pictures Home Entertainment Tabs Apr. 28 As The Street Date For DVD And Blu-ray Editions Of The Wedding Ringer