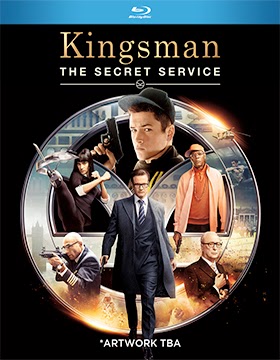 20th Century-Fox Home Entertainment announced this past week that director Matthew Vaughn’s film adaptation of the Mark Millar and Dave Gibbons comic book series, Kingsman: The Secret Service, will be available as DVD and Blu-ray product offerings on June 9.

As to bonus features for this likely first entry in a film franchise series, there will be a commentary option (unspecified) and at least a half dozen featurettes, including one titled “Kingsman: The Secret Service Revealed - Panel-To-Screen: The Education of a 21st Century Super Spy.”

Also getting a release calendar assignment this past week is director David Gelb’s The Lazarus Effect, a not-so-subtle reimaging of filmmaker Joel Schumacher’s 1990 film release of Flatliners.

The street date for both DVD and Blu-ray editions is June 16 … the ARR works out to 109 days and domestic ticket sales were $25.4 million.

Although the plot lines are different, one can’t help bit compare The Lazarus Effect with Flatliners.  A young cast (looking to breakout), death being toyed with … and its after effects.   The big difference lies in the after effects, which take on Carrie-like creepiness when Zoe (Olivia Wilde — Deadfall, Cowboys & Aliens, TRON: Legacy), one of their members, dies and is brought back to life.

No word as to any bonus nuggets at this time.