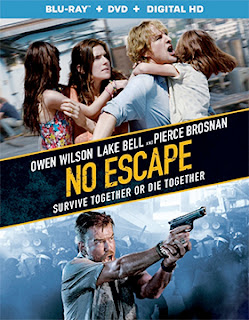 Every traveler’s nightmare — besides bad weather and a run in with some bad food — is a political crisis that throws everything into chaos.   Director John Boorman’s 1995 thriller, Beyond Rangoon, saw American tourist Laura Bowman (Patricia Arquette) caught up in a coup in Burma and spends her vacation time locked in a nip and tuck fight for survival against near impossible odds.

Director John Erick Dowdle’s  No Escape, which is heading to the home entertainment market place on Nov. 24 as both DVD and Blu-ray product offerings from Anchor Bay Entertainment, covers similar ground and is just as effective as Boorman’s film from 20 years ago.

For the record, the ARR is a swift-to-market 88 days and domestic ticket sales currently stand at $27.1 million.

Jack Dwyer (Owen Wilson), his wife Annie (Lake Bell) and their two daughters, Beeze (Claire Geare) and Lucy (Sterling Jerins) lands in an unnamed Southeast Asian country (filmed on location in Thailand) where he has been hired as an engineering consultant.   It is a paradise, the people are friendly, including a Brit named Hammond (Pierce Brosnan), who helps Jack and his family get from the airport to their hotel. 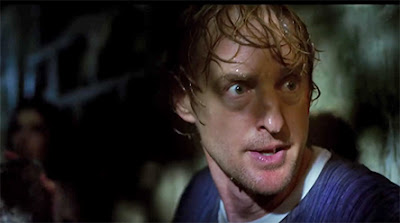 And then it begins … a rollercoaster ride of death, destruction and absolute chaos.   The reason for the coup is a little dicey, but even if it were about a choice between butterscotch and chocolate ice cream it wouldn’t make a lick of difference.

No Escape plays more like a sci-fi thriller with invading aliens killing everything in their path.   Jack, on his own, might have a chance of escaping the city and making a clean getaway.   With his wife in tow, those chances dim, but with his wife and two daughters, it looks impossible.

The rebels immediately execute any foreigners they come across — the hotel is a slaughterhouse as the rebels move from systematically from floor to floor murdering the guests without mercy.  The roof of the hotel provides only a temporary respite and the dash to the American Embassy proves to be a dead end (literally). 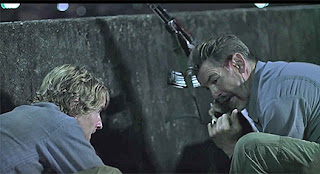 No Escape is tense and riveting, perhaps not in the same class as Beyond Rangoon, but a worthy thrill ride nonetheless.

Bonus features include commentary from writer/director John Erick Dowdle (Quarantine, As Above, So Below, etc.), who is joined by his brother and co-writer Drew, deleted scenes and a Behind-the-Scenes photo gallery.