Wolfe To Release Writer/Director Louise Wadley's All About E On DVD On Dec. 1 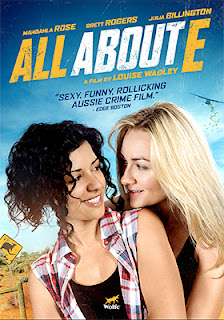 Damn if the Aussies don’t make interesting films.   Especially indie films, there’s always something edgy about the filmmakers and their filmmaking from Down Under.

The latest is from writer/director Louise Wadley, who has crafted her filmmaking skills over the past 20 years with documentary and short films — plus some independent producing as well — and now makes the jump to the feature-length arena with All About E.

Wolfe has tabbed Dec. 1 as the domestic DVD debut date for this sweet indie gem.

One is immediately reminded of Aussie filmmaker P.J. Hogan’s 1994 film release of Muriel’s Wedding, which made Toni Collette and Rachel Griffiths international stars.   That cinematic treasure was a nifty mix of drama and comedy — you are laughing out loud one minute and near tears a few moments later. 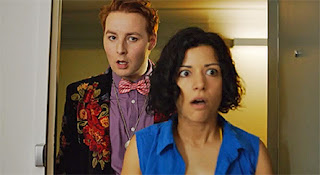 Wadley captures the same here as All About E swings from the hilarious to the dangerous at a moment’s notice.   Our heroine, “E” (Mandahla Rose — Wolf Creek 2), is a somewhat promiscuous DJ at a popular gay nightclub in Sydney, who just happens to be “married” to a gay Irish bloke named Matt (Brett Rogers).

As with Muriel Heslop’s nuptials, E’s marriage is a sham as well, but it does serve two purposes — it keeps her family off-balance as to her sexual preferences and Matt is able to stay in Australia (and besides, he’s her personal costume designer).   Now even a casual observer could see through this façade.

The MacGuffin that rockets this story into high gear is a bag full of drug money, left in the back of a cab by an inept courier, and now in E’s possession.   This could solve a lot of problems, but in no time her and Matt are on the run and there is simply no place to hide … except, possibly, the one place where she is not welcomed.

Mandahla Rose and Brett Rogers are fantastic.   There’s a chemistry between them that makes the writing all the funnier and the gangsters-in-pursuit counterpoint all the more tense in that we have come to like E and Matt and want nothing to happen to them.

As to that “place” where they end up, it’s an outback spread run by Trish (Julia Billington).   The pair — E and Trish — have a history that didn’t end well.  But with everyone’s life on the line some things can be overlooked … perhaps even a flame rekindled.

All About E is a wonderful “cross-over” film from Down Under that deftly mixes genres, the direction and writing are solid and the technical aspects (cinematographer and sound) are top-notch.   Indeed, All About E could be a travel promo for Australia (come on down, visit the outback), except for those nasty parts where the sleazy drug dealers are trying to kill E, Matt and Trish! 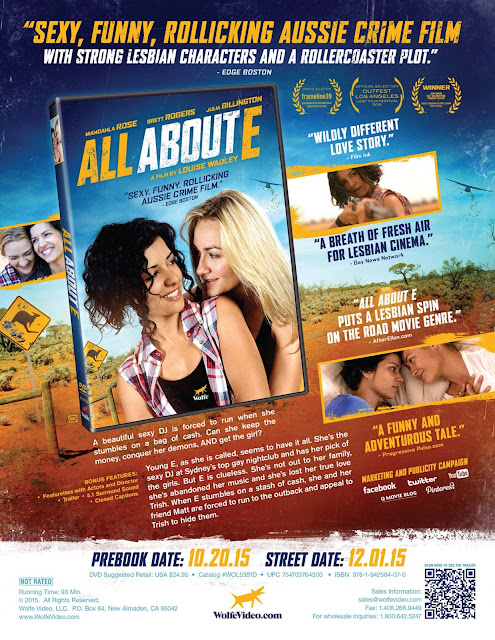 Email ThisBlogThis!Share to TwitterShare to FacebookShare to Pinterest
Labels: DVD and Blu-ray Release Report, Wolfe To Release Writer/Director Louise Wadley's All About E On DVD On Dec. 1