DVD And Blu-ray Editions Of Assassination From Well Go USA On Dec. 1 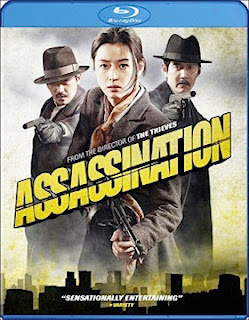 The ARR comes in at 116 and the domestic box office take was an impressive $1.9 million (it was a blockbuster in South Korea during the past year).

It can be tough doing a costume/period film.   Style, mannerisms, historical accuracy and the mores of the period can all come into play — getting it right can be a bit of a challenge.
Dong-hoon handles these issues easily (everything seems to ring true), which allows us — the audience — to focus on the intricacies of the plot, and there are more than a few to twists and turns to keep track of.

By 1933, when the action takes place, Korea was well within the influence of the Japanese Empire (a process that began shortly after the turn of the century and lasted throughout World War II).   Thus the plot to assassinate a high-ranking Japanese military official by the name of Kawaguchi (Shim Cheol-jong) and a wealthy Korean businessman with Japanese-leanings (played by Lee Geung-young) would be more of a statement than an act that would have any real lasting effect.

We said twists and turns.  Here we go, the Chinese are trying to keep the Japanese off balance, so they aid the Korean resistance in putting together a hit team in Shanghai that consists of Ahn Ok-yun (Jun Ji-hyun — The Berlin File, Snow Flower and the Secret Fan, Blood: The Last Vampire), Big Gun/Chu Sang-ok (Cho Jin-woong — Raging Currents, The Front Line, etc.) and Hwang Deok-sam (Choi Deok-moon — The Admiral, The Thieves).

However, one of the team members is secretly working for the Japanese, who have also put together their own “hit” team, which is composed of Hawaii Pistol (Ha Jung-woo — The Berlin File, The Client, etc.) and Young-gam (aka: Old Man — played by Oh Dal-su — The Host, Old Boy, The Thieves).

So let the games begin.   Hit team versus hit team, with a ringer in the mix.

Assassination is presented in Korean with English subtitles.

Email ThisBlogThis!Share to TwitterShare to FacebookShare to Pinterest
Labels: DVD And Blu-ray Editions Of Assassination From Well Go USA On Dec. 1, DVD and Blu-ray Release Report