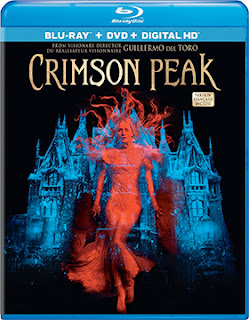 Oscar-nominated filmmaker Guillermo del Toro’s turn-of-the-Century (20th Century that is) ghost story, Crimson Peak, will be getting both a DVD and a Blu-ray/DVD Combo Pack (with UltraViolet) push from Universal Studios Home Entertainment on Feb. 9.

The ARR works out to an industry average of 116 days and domestic ticket sales currently stand at $31.1 million.

Edith (Mia Wasikowska — Madame Bovary, Albert Nobbs, Alice in Wonderland, etc.) is an up-and-coming author with both a penchant for penning gothic tales and periodic visitations from the ghost of her dead mother, who warns her cryptically about “Crimson Peak.”

Such visions are not heeded — if they were we wouldn’t have much of a story — as the lovely Edith soon finds herself trapped in a creepy — and very haunted — English manor by incestuous siblings Sir Thomas Sharpe (Tom Hiddleston — best known to American audiences as Loki from Thor and Thor: The Dark World) and Lady Lucille (Jessica Chastain — back-to-back Best Supporting Actress nominations for The Help (2011) and Zero Dark Thirty (2012)). 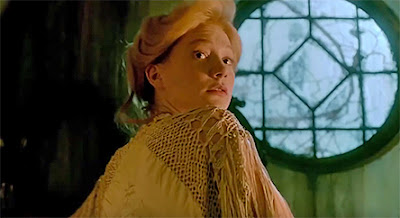 Can Edith’s suspicious father (played by Deadwood’s Jim Beaver) and her would-be lover, Alan (Charlie Hunnam — Pacific Rim and as “Jax” from the Sons of Anarchy television series), discover her plight before she too falls victim to their evil ways?!

Crimson Peak is a visual feast, perhaps not as scary as genre fans would have hoped for, but nevertheless well worth a look-see for those who missed its theatrical run.

Bonus nuggets include commentary from filmmaker Guillermo Del Toro, who is joined by co-writer Matthew Robbins (Mimic, The Sugarland Express, Dragonslayer, etc.), deleted scenes and a pair of production featurettes — “The Light and Dark of Crimson Peak” and “Beware Of Crimson Peak.”