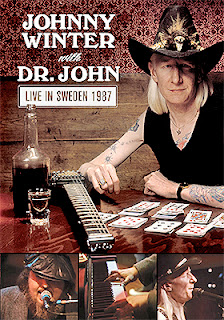 It has been around since the bygone days of VHS and there have been bootlegged DVD editions floating around the globe (even from Japan) of dubious quality, but now fans of blues-rock legend Johnny Winter can rejoice with the news coming from MVD Entertainment Group that the Sonet Studios session with Dr. John titled Johnny Winter & Dr. John: Live In Sweden 1987 will be available on DVD on Apr. 22.

As a special bonus, MVD Entertainment Group is including a vintage 1972 rendition of “Prodical Son.”