Paramount Home Media Picks May 3 For The Release Of A Blu-ray/DVD Combo Pack Of Top Gun: 30th Anniversary Edition 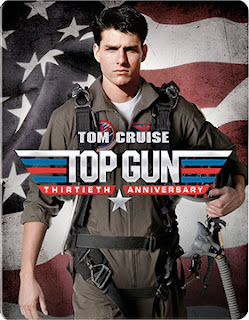 Paramount Home Media announced this past week that Maverick, Goose and the Iceman will be taking to the skies once again on May 3.

That’s the launch date that has been selected for director Tony Scott’s Top Gun: 30th Anniversary Edition, which will be taking the form of a limited edition Steelbook Blu-ray/DVD Combo Pack.

Fans can enjoy the action in the sky — and, yes, on the ground between Cruise and Kelly McGillis — once again … which is all set against a driving soundtrack toplined by Berlin’s haunting (and Oscar-winning) “Take My Breath Away,” Kenny Loggins’ “Danger Zone” and Otis Redding’s memorable “The Dock of the Bay.”

Plus, as this is really cool, there are four separate music videos from the film — Kenny Loggins’ “Danger Zone,” Berlin’s “Take My Breath Away,” Loverboy’s “Heaven in Your Eyes” and Steve Stevens and Harold Faltermeyer’s “Top Gun Anthem.”

Email ThisBlogThis!Share to TwitterShare to FacebookShare to Pinterest
Labels: DVD and Blu-ray Release Report, Paramount Home Media Picks May 3 For The Release Of A Blu-ray/DVD Combo Pack Of Top Gun: 30th Anniversary Edition