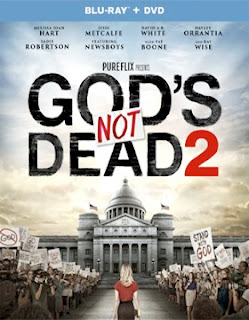 Pure Flix Productions will be teaming with Universal Studios Home Entertainment on Aug. 16 for the release of both DVD and Blu-ray/DVD Combo Pack editions of director Harold Cronk’s God's Not Dead 2.

The ARR is 137 days and ticket sales — while not as robust the original — were nevertheless impressive at $20.7 million.

Bullying is a hot issue in schools these days, but that issue is given a slightly different spin when high school teacher Grace Wesley (played by Melissa Joan Hart — perhaps best known to audiences as Sabrina in the Sabrina, the Teenage Witch television series from 20 years ago) dares to reference the Bible in her classroom during a session on Martin Luther King, Jr. and Gandhi.

From the principal of the school to the school board itself, Grace is methodically bullied into picking between losing her job or renouncing her faith.   When she declines the premise of the “Hobson’s Choice” that she has been given it is off to court they take her.

The script is a set-up from the get-go.   Grace will be attacked and ridiculed from all sides, but in the end her faith will prevail.   For the intended audience it is a morality play with the prerequisite steps to a just outcome.

With that said, there are some underlying tones that the film addresses that are becoming more and more prevalent in so-called academic circles.   Indeed, the choice of focusing on a teacher as the object of the bullying, as opposed to a student, is no accident. 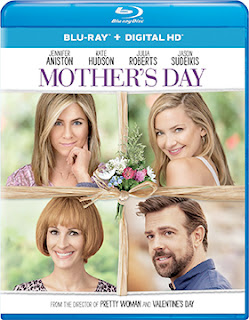 In other release news this week from Universal Picture Home Entertainment — and not nearly as controversial — is director Garry Marshall’s latest “holiday” titled dramedy, Mother’s Day (in the same ensemble vein as his Valentine’s Day and New Year’s Eve films).   Look for both DVD and Blu-ray editions on Aug. 2.