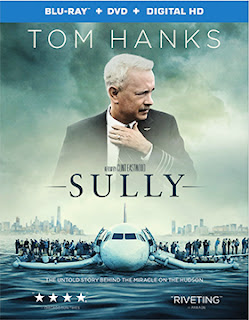 Some of the jump-the-gun websites had street date information a little over a week ago that tagged director Clint Eastwood’s Sully with a Dec. 20 release window.   We held off in anticipation of a formal announcement from Warner Bros. Home Entertainment.

Tick tock … tick tock … that formal announcement finally arrived this past week.   And yes, the early news was correct, it will be available on Dec. 20 as a three-SKU product offering.

Planned for release are a 4K Ultra HD/Blu-ray Combo Pack, a Blu-ray/DVD Combo Pack and a double-disc DVD edition (bonus features are on the second disc, which can be dropped for a DVD-only version at rental kiosks or subsequent price-promotions that might be in the offing from Warner Bros. Home Entertainment).

Once again Clint Eastwood, the master filmmaker, delivers both a commercial film (on time, under budget) and a critically-acclaimed film that is likely to be in the Oscar mix — although it is going to be a tough slough with Mel Gibson’s Hacksaw Ridge in the running as well … and don’t discount the Academy of Motion Pictures Arts and Sciences efforts to muck everything up in the Best Picture race with all sorts of vanity projects that get gushing reviews that no one really wants to see (they’ve been working very hard these past few years on destroying the brand — do we really need up to ten Best Picture nominees???).

As to bonus goodies, there are three production featurettes common to all release SKUs.   These are: “Sully Sullenberger: The Man Behind the Miracle,” “Moment by Moment: Averting Disaster on the Hudson” and “Neck Deep in the Hudson: Shooting Sully.”