Oscilloscope Laboratories Selects Nov. 28 For The DVD And Blu-ray Release Of Dominique Abel And Fiona Gordon's Lost In Paris 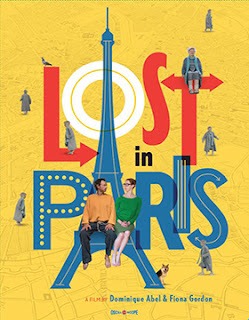 The line; the immortal line, “We’ll always have Paris,” was delivered by Rick (Bogart) — in a movie — and it became iconic of everything about the city.  Paris, a place for lovers; a city of lights and feelings where memories linger.

Oh, yes, we should not forget Cole Porter … “I love Paris when it sizzles.”  Paris and the river Seine, the Eiffel Tower … and more, so much more … it truly does sizzle!

On Nov. 28 we can absolutely guarantee you that you will remember the Paris of Bogart and Porter in a whole new light.   Nov. 28 is the street date for both DVD and Blu-ray editions of Oscilloscope Laboratories box office smash, Lost in Paris.

This comedy gem — this love story — from Dominique Abel and Fiona Gordon has pulled in $571,116 (and counting), which is unheard of for a foreign-language arthouse entry distributed by an independent!   For the record, the ARR is 165 days.

Lost in Paris is a visual feast!   It is the best French-language film of the year — of the decade, perhaps.   It should be the country’s official entry for the Oscar derby this year.   The French will certainly pick something dull and boring (that we’ve seen before in other forms) as their entry, but this original SHOULD BE their entry.  Period! 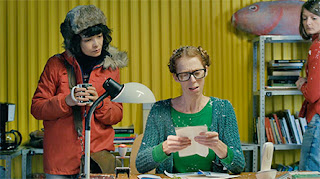 The cinematic spirits of Inspector Clouseau, Woody Allen, Buster Keaton, Charlie Chaplin, Tati’s Monsieur Hulot (and more) are alive and well and all rolled into 84 minutes of comedy delights as Fiona, a Canadian (literally from the great white north), goes in search of her missing aunt, Martha, who lives in Paris and then crosses paths with Dom, a bum.

The set-pieces and visuals are like homages to these cinematic spirits … and they come at a blistering pace!   You will still be laughing or smiling at this bit or that one when the next arrives … Lost in Paris is a film that will have you laughing, grinning, chuckling or smiling from frame one.

Indeed, you know that you are in for a treat when Fiona (Fiona Gordon — Rumba, The Fairy, etc.) — a leggy scarecrow of a woman with bright red hair, who lives in a perpetually snowbound village somewhere in Canada — receives a letter (that by rights should be in a landfill) from her aunt Martha (played by the late Emmanuelle Riva — Oscar nominated for her performance in filmmaker Michael Haneke’s 2012 film, Amour).   The authorities want to put her in a home and she wants Fiona to help her. 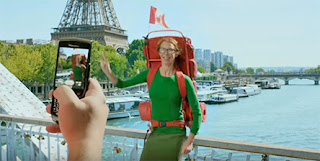 Fiona lands in Paris with her backpack (complete with Canadian flag), but Martha has gone missing — actually, she’s on the run.   It seems that Martha escaped a social worker by hiding in plain sight (a terrific sight gag with her neighbor, played by Abel and Gordon regular, Philippe Martz).

There’s no answer at the apartment, so Fiona goes in search of her and ends up in the Seine River (another terrific sight gag) and her backpack and money are lost.

Dom keeps her purse (money and passport) and is enamored with one of her pullover sweaters, so keeps that too … and goes back to the fancy restaurant to celebrate his good fortune (wearing the sweater).   Meanwhile, Fiona has dried out and gone to the Canadian embassy to get a new passport … they give her a meal voucher and tell her to come back tomorrow.   Of course she ends up at the same restaurant as Dom! 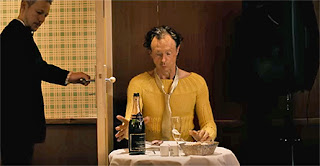 You are literally less than ten minutes into the movie and you haven’t stopped laughing yet.   And it is about to get even better … even more bizarre.   During the balance of the film (which takes place over a 48 hour period), you will see Fiona and Dom dance (an amazing sequence), attend a funeral (with an impromptu eulogy delivered by Dom), wander the streets of Paris, have a spilt-screen romantic dream sequence (think: Rock Hudson and Doris Day), fall in love, climb the Eiffel Tower at night … and find the missing Martha.   And we didn’t even mention the Canadian Mountie or the mystery of the lost sock.

You’ve laughed and smiled and chuckled all the way to the end … and you’re not done yet.  There are the ending credits with Kate & Anna McGarrigle delivering the “Swimming Song” as the camera glides gently down the Seine away from Fiona and Dom, who are standing at Pont de Grenelle and the Paris version of the Statue of Liberty (with the Eiffel Tower in the background).  Fiona and Dom will always have Paris!

Lost is Paris is presented in French and some English, with English subtitles.   Bonus features include an on-set video session with Abel and Gordon, a newly-prepared video essay by film critic Peter Debruge and two bonus short films by Abel and Gordon — “Walking on the Wild Side” and “The Tent.” 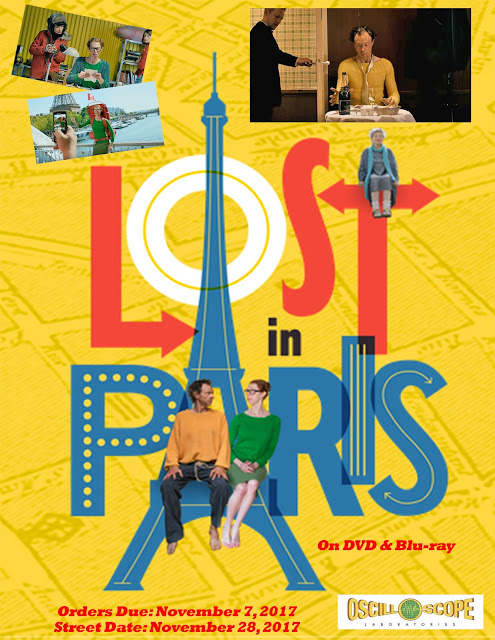 Email ThisBlogThis!Share to TwitterShare to FacebookShare to Pinterest
Labels: DVD and Blu-ray Release Report, Oscilloscope Laboratories Selects Nov. 28 For The DVD And Blu-ray Release Of Dominique Abel And Fiona Gordon's Lost In Paris