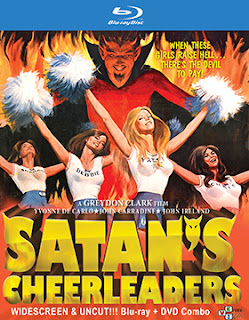 VCI Entertainment has lined up a new 2K restoration — from the original 35mm camera negative — of director Greydon Clark’s 1977 satanic horror tale, Satan’s Cheerleaders, for delivery to fans as a Blu-ray/DVD Combo Pack on Nov. 7.

It all seems innocent enough.   Benedict High School cheerleaders Patti (Kerry Sherman), Debbie (Alisa Powell), Chris (Hillary Horan) and Sharon (Sherry Marks) practice their routines under the watchful eye of their coach, Miss Johnson (Jacqulin Cole), and then take a little time off to play some “touch” football with members of the school’s football team down on the beach.

Your first thought is that this is going to be a 1970’s sexploitation flick.   High school cheerleaders, football players and hormones — add in a long-standing rivalry with neighboring Baker High School — and it all seems to point to just that, sexploitation; drive-in titillation!

But we soon discover that Benedict High School is the secret home of a coven of witches who are in league with, Billy (Jack Kruschen), the school’s creepy janitor and events will quickly take Clark’s film in an entirely different direction. 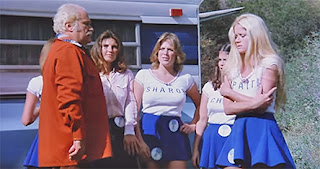 When Miss Johnson’s car, filled with the four cheerleaders, breaks down on the way to big game with Baker, we know in our heart of hearts that this is the victim pool and things are not going to go well for the girls.   But, wait, it’s Billy to the rescue, but instead of taking the cheerleaders to the game he drives them to a secluded spot and puts the whammy on Patti, who starts taking her clothes off!!!

Of course this is all too much for Billy, who has a heart attack.   The girls and their coach find the local sheriff, whose name just happens to be B. L. Bubb (John Ireland), and his wife Emmy (Yvonne De Carlo), and they report all of the crazy things that happened on the way to the game.

As it turns out, only one of the five among the cheerleaders and coach is a virgin, and the plan is to offer her as a bride to Satan.   The sheriff and his wife are in on it.  Which one is it?  The rest, of course, are expendable.   To complicate matters, Patti is still under Billy’s spell and the clock is ticking … they might not make the game! 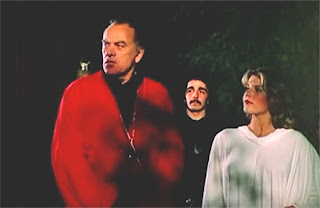 Satan’s Cheerleaders is one of those mixed-genre indie films from the period that actually exceeded all expectations.   It works both as a sexploitation film — with some unexpected violence — and a nice twist-and-turn horror film. 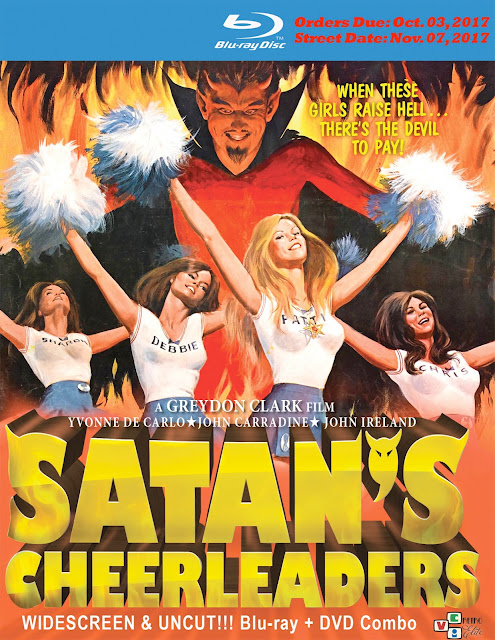