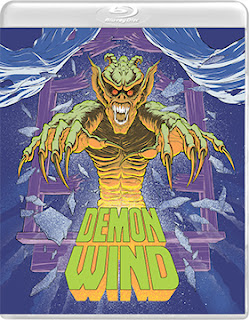 Vinegar Syndrome unleashed a whirlwind of horror film restorations announcements this past week that will be in place for genre fans to savor one week before the witching hour of Halloween.   Five Blu-ray/DVD Combo Packs will be ready at retail on Oct. 24 … so let’s get to it.

Leading the way is a 2K restoration — from the film’s 35mm camera negative — of writer/director Charles Philip Moore’s 1990 film release of Demon Wind.

In a violent prologue the fate of Cory’s (Eric Larson) grandparents is revealed … a demon infestation!   Now skip ahead some 60 years and he, his girlfriend, Elaine (Francine Lapensée), and a group of their friends are back at the scene of the slaughter after Cory’s father has killed himself and the farm is now his.

You can understand how someone might want to get to the bottom of what happened so many years ago, but shouldn’t there be a nagging little suspicion that if your grandparents were murdered and dear old dad killed himself that maybe, just maybe, something is amiss at the old family homestead. 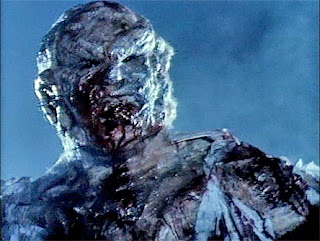 The victim pool, that would be Cory, Elaine and their friends are soon going to discover what is afoot … and it ain’t pretty, especially when the root of all evil just might be a family member!

Next up is writer/director Fabrice A. Zaphiratos’ 1986 slasher flick — with a supernatural twist — Blood Beat! 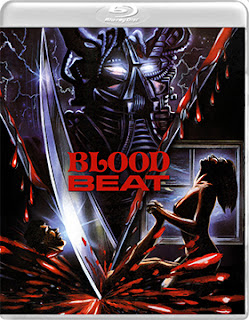 This indie direct-to-video release gets a new 2K restoration from Vinegar Syndrome — from the 35mm original camera negative — and for anyone not holding an old VHS copy of Blood Beat this could be for all intents and purposes the film’s coming out party.

As to bonus goodies, there is a commentary track from filmmaker Fabrice A. Zaphiratos — who appears to have dropped off the radar after directing Blood Beat — plus there are video sessions with Zaphiratos and cinematographer Vladimir Van Maule … and Vinegar Syndrome hints that there might be additional bonus features by street date.

Next up is director Ted V. Mikels’ 1972 tribute to canned cat food insanity, The Corpse Grinders.  Vinegar Syndrome has a new 2K restoration planned.
This film is so much fun … you have grave robbers and a cat food canning operation in cahoots.   That’s delicious!   Suppose one of your love ones was recently buried out at the Farewell Acres Cemetery, where, as fast as Caleb (Warren Ball) buries them, he turns around and digs them and sells the corpses (in bulk) to Landau (Sanford Mitchell) over at the Lotus Cat Food Company. 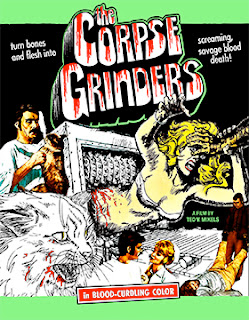 There is just one little problem with this “arrangement.”   Caleb is getting “stiffed” by Laudau (pun intended) and he threatens to cut him off.  To make matters worse, Laudau is also holding out on his partner Maltby (J. Byron Foster) … who has a little fetish, which we won’t talk about.

Meanwhile, at a local clinic, Dr. Glass (Sean Kenney) and his nurse, Angie (Monika Kelly) — who are lovers as well — begin to take notice of the strange behavior of the local cats.   And there is a mysterious figure that is also lurking about who has taken an interest in Lotus.

Will they figure out what is going on at the cannery … will Maltby get an unconscious Angie on the conveyor belt so that he can have his way with her.   Will cats turn on everyone!!! 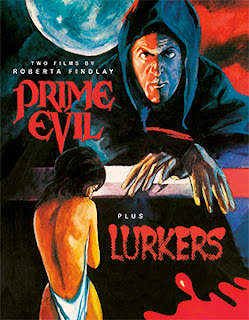 As to bonus nuggets, there in a commentary track featuring American Grindhouse’s Elijah Drenner with a mix of vintage comments from filmmaker Ted V. Mikels and a vintage video session with Mikels titled “Ted Talks.”

Rounding out the Oct. 24 Blu-ray/DVD Combo Pack selections are the double feature presentation of director Roberta Findlay’s Prime Evil (1988) and Lurkers (also from 1988), both starring Christine Moore — Findlay provides commentary on Prime Evil — and Findlay’s earlier adult-themed horror film A Woman’s Torment (1977), which features both the X-rated and the trimmed down R-rated cuts of the film (Findlay also provides commentary). 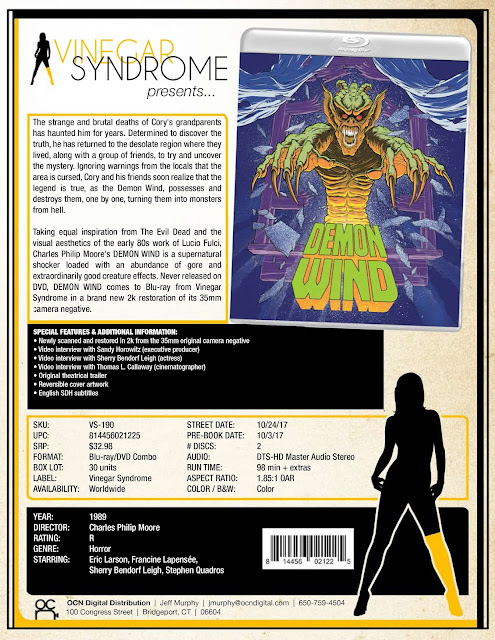