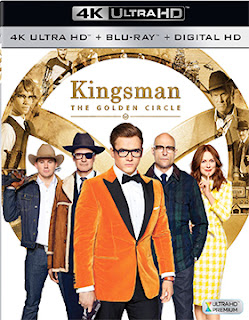 Amazon.com jumped the gun this past week and revealed that 20th Century-Fox Home Entertainment will be filling a December hole with a post-Labor Day theatrical hit.

The week before it was Lionsgate Home Entertainment who dipped into Peter’s pocket to pay Paul with the Dec. 5 home entertainment launch of director Michael Cuesta’s American Assassin, which is a post-Labor Day release being rushed to market in December instead being held back from release until the more traditional first quarter of the New Year.

The ARR was 81 days, which is roughly three weeks faster than the current “Hollywood” studio average for transitioning a theatrical release — grossing $25 million or more — from theatre venues to home entertainment outlets.

This week it was the usual suspect once again, amazon.com, getting out in front of an official announcement from 20th Century-Fox Home Entertainment on the home entertainment debut of writer/director Matthew Vaughn’s hit action/comedy, Kingsman: The Golden Circle.

The street date — according to amazon.com — will be Dec. 12, which also yields a quick-to-market ARR of just 81 days.   Box office receipts currently stand at $97.3 million … the original, Kingsman: The Secret Service, pulled in $128.3 million during its February/March run back in 2015.   So we have a film franchise in the making here.

Why the rush?   The sad truth is that there are simply not enough hit films (ticket sales of $25 million plus) in inventory to service the December release calendar.   Through the first ten months of this year, we’ve seen 68 films reach this golden circle, while last year — through the same period — “Hollywood” was able to grind out 76 films of that box office caliber.    Just five years ago, 2012, there were 86 films.

So 20th Century-Fox is the latest studio to forsake Q1’18 opportunities for the more immediate December (Christmas-season) delivery of DVD, Blu-ray/DVD Combo Pack and 4K Ultra HD/Blu-ray Combo Pack editions of Kingsman: The Secret Service to consumers.   Will a problem develop for the studio in Q1’18 as a result?