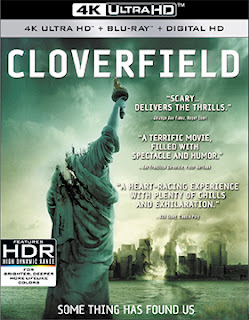 The “Cloverfield” sci-fi films are getting a 4K Ultra HD push in the New Year!

Paramount Home Media made it official late this past week that both of the J.J. Abrams produced films, director Matt Reeves’ 2008 sci-fi thriller, Cloverfield, and director Dan Trachtenberg’s 2016 film release of 10 Cloverfield Lane, will be available as 4K Ultra HD/Blu-ray Combo Packs on Jan. 23.

No word at deadline as to new bonus features, if any.    Since the Blu-ray discs will be included, we assume that the original bonus content will carry over to these new 4K SKU configurations.

Cloverfield included commentary from Matt Reeves, four additional scenes, a pair of alternate endings and a quartet of featurettes — “Document 01.18.08: The Making of Cloverfield,” “Cloverfield Visual Effects,” “I Saw It! It's Alive! It's Huge!” and “Clover Fun.”