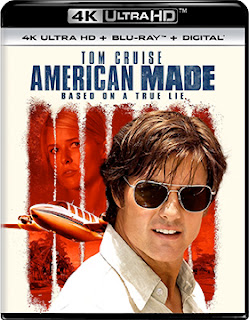 Slated for release on Jan. 2, Universal will be shipping DVD, Blu-ray/DVD Combo Pack and 4K Ultra HD/Blu-ray Combo Pack editions to retailers on the first street-date Tuesday of 2018.

The ARR is 95 days and domestic box office receipts currently stand at $48.5 million.

When you smuggle drugs, make deals with Pablo Escobar and the CIA it will eventually end with your blood on the sidewalk.   The trailer gave the impression that Cruise was playing an adult version of “Joel,” his wheeler-dealer character in Risky Business, and maybe that’s the best way to sell a film in which the star ends up being murdered ... there was just no happy ending in store for Barry Seal.

Bonus goodies included deleted scenes and a half-dozen featurettes — “American Storytellers,” “Cruise and Liman: A Conversation,” “In the Wings,” “Shooting American Made,” “Flying High” and “The Real Barry Seal.”
Posted by DVD & Blu-ray Release Report at 6:46 AM