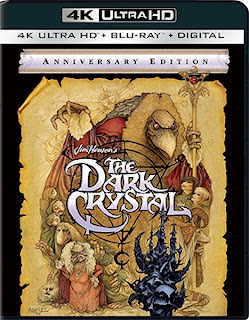 Sony Pictures Home Entertainment announced this past week that a new 4K restoration (from the original camera negative) of Jim Henson and Frank Oz’s Christmas of 1982 fantasy adventure, The Dark Crystal, will be available as both 4K Ultra HD/Blu-ray Combo Pack and Blu-ray product offerings on Mar. 6.

Additional bonus goodies include a “Picture-in-Picture Storyboard Track,” the 1983 feature-length documentary titled The World of The Dark Crystal, photo galleries and more.

Also added to the home entertainment release calendar this past week from Sony Pictures Home Entertainment is director Joseph Kosinski’s story of the Granite Mountain Hotshots, Only the Brave, and the fatal Yarnell Hill Fire (Arizona) of June of 2013 that claimed 19 of the 20 member team. 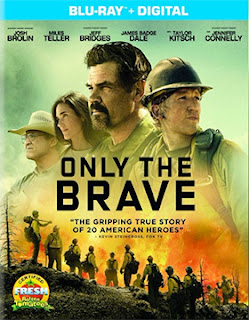 The ARR is 109 days and domestic ticket sales generated from the film’s mid-October theatrical run were $18.1 million.

Both DVD and Blu-ray editions will be available.

Bonus features include commentary from director Joseph Kosinski (Oblivion, Tron: Legacy), who is joined by actor Josh Brolin (who plays Granite Mountain Hotshot Eric Marsh), the Dierks Bentley music video, “Hold the Light” (with S. Carey), and a trio of featurettes — “Honoring the Heroes: The True Stories,” “Behind the Brotherhood: The Characters” and “Boot Camp: Becoming a Hotshot.”
Posted by DVD & Blu-ray Release Report at 5:31 AM