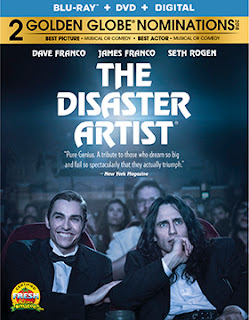 With a shrug of the shoulders and a ho-hum publicity launch effort, Lionsgate Gate Entertainment appears to be trying to fly under the radar with its Mar. 13 home entertainment release of DVD and Blu-ray/Combo Pack editions for actor/director James Franco’s The Disaster Artist.

You would think that both A24 and producer/director James Franco would have to be just a little miffed over that bit of strategic planning … but, as they say, “oh well.”

The ARR is 102 days and domestic box office revenues currently stand right at $21 million.
Bonus features include commentary from actor/director James Franco, his co-star (and brother) Dave Franco and the real-life Tommy Wiseau and Greg Sestero, plus a trio of featurettes — “Oh, Hi Mark!: Making a Disaster,” “Directing a Disaster” and “Just a Guy Leaning on a Wall: Getting to Know Tommy.”
Posted by DVD & Blu-ray Release Report at 6:15 PM