Tad The Lost Explorer And The Secret Of King Midas On DVD From Paramount Home Media On Apr. 10 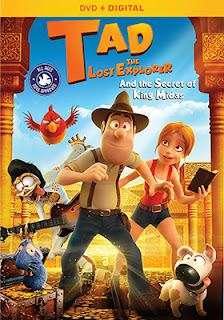 Tadeo Jones, the hero of Spain’s animated feature hit of 2012, returns on Apr. 10 in his latest feature-length adventure, Tad the Lost Explorer and the Secret of King Midas, courtesy of Paramount Home Media.

The Dove Approved (ages 12+) film got an unannounced 100-theatre break in the theatrical “death zone” during the week right after the Thanksgiving holiday to qualify for Oscar consideration.   Once you get past Coco, Ferdinand and the adult-themed Loving Vincent, the other two slots were wide open, so Paramount Classics took a savvy low-risk chance to grab one of the remaining Oscar-nominated spots in the Animated Feature Film category by qualifying the film for Oscar-consideration.

For the record, the ARR for the DVD release of Tad the Lost Explorer and the Secret of King Midas works out to 130 days.

Fans of Tad or Tadeo (English-language version voiced by Trevor White), or just animation fans in general, will not be disappointed in this well-produced adventure that has our hero heading off to Las Vegas to attend an archaeological presentation by his friend, Sara Lavrof (voiced by Alex Kelly), only to see her abducted right off of the stage.   It seems that she has discovered a papyrus that proves the existence of the Necklace of Midas … which gives the wearer the power to turn items to gold!!!

The evil Jack Rackham (voiced by Ramon Tikaram) is the brains behind the kidnapping  and he wants Sara to lead him to the necklace.   So it falls to the often-inept Tad — and his sidekick Mimeo, an Egyptian mummy (voice by Joseph Balderrama) — to follow the clues and rescue Sara.   Belzoni, Sara’s talking parrot and Tad’s dog join the adventure and offer comic relief!

It’s all great fun, so on Apr. 10 join Tad, Mimeo and their animal friends as they seek to rescue Sara from the villainous Jack Rackham in Tad the Lost Explorer and the Secret of King Midas.

Email ThisBlogThis!Share to TwitterShare to FacebookShare to Pinterest
Labels: DVD and Blu-ray Release Report, Tad The Lost Explorer And The Secret Of King Midas On DVD From Paramount Home Media On Apr. 10