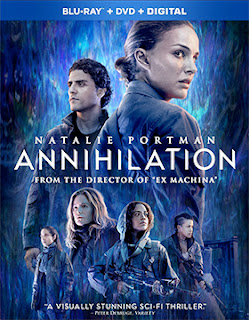 The ARR works out to 95 days and box office receipts came in at $32.7 million.

Alex Garland gave us the script for 28 Days Later, which was a sensation by filmmaker Danny Boyle … a decade went by and then wham, Ex Machina, which he both directed and wrote.   A stunner, cerebral and creepy … and Garland’s script was nominated for an Oscar for Best Original Screenplay, losing out to Spotlight.

Now comes Annihilation, which Garland adapted for the screen from a novel by Jeff VanderMeer (one of his “Southern Reach” trilogy of books … “Annihilation,” “Authority” and “Acceptance”) and directed.   It too is a stunner.

Annihilation is dark a terror ride … exactly the type of sci-fi/horror film that genre fans have been demanding, but instead the studios keep serving up mindless, big-budget CGI drivel, or if not drivel, play it way too safe.  Annihilation is, at the end of the day, a haunted house thriller, except it doesn’t take place in a haunted house, but in a deceiving beautiful stretch of woodlands.

Oh yes, and one other thing, if you are expecting Natalie Portman as Lena, the film’s star, to be just like her vivacious Padmé of Star Wars, think again.   She’s cold (for a good reason) and clinical.

The set-up is an alien presence that came crashing to Earth as a meteor and immediately set up shop around a lighthouse (a metaphor perhaps), creating a dome-like field that has been dubbed “The Shimmer.”   A psychedelic light show that hides a mystery … everyone and everything (drones) that has gone inside hasn’t come back.

There’s a prologue backstory — the film does flip back and forth in time — that establishes a relationship between Lena, a biologist, and her husband Kane (played by Star Wars’ “Poe Dameron,” Oscar Isaac, who was Nathan in Garland’s Ex Machina), who went on a secret mission and never came back.  Well, actually he did, but Lena hasn’t been told, because his secret mission was inside “The Shimmer” … and he is the only human who has returned (and he is on life support).

So basically Lena is in mourning as she has lost her soul mate.   It’s a year later and reluctantly Lena is spirited off to “Area X,” where she learns that Kane is a vegetable and she is given — more or less — the opportunity to assemble a team (genre fans will recognize this as the “victim pool”) and investigate the inner-workings of “The Shimmer.”

Her team — all women — are composed of Josie (Tessa Thompson), a physicist, Dr. Ventress (Jennifer Jason Leigh), a psychologist, Cass (Tuva Novotny), an anthropologist and a medic by the name of Anya (Gina Rodriguez).   They are armed to the teeth and very much kick-ass.

Into “The Shimmer” they go and immediately lose touch with the outside world (the door to the haunted house slams shut) and what they discover is a woodland/swamp populated by creatures that have been mutated by the alien force … sort of a bio lab for experimentation.    Tranquil at first — even strangely inviting — but things soon go south and creatures, the creatures of nightmares, soon take their toll on the group.

Annihilation is a gem, a sci-fi gem, a creep-out horror tale that is also a gem.   If you missed this one in theatres, then circle May 29 on your home entertainment viewing calendar as this is one that will be a must-see!!! 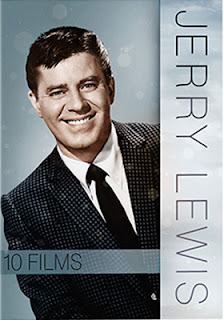 Bonus features, which are exclusive to the Blu-ray/DVD Combo Pack SKU, are divided into three “making-of” segments.   The first, “Southern Reach,” has two sections (featurettes) — “Refractions” and “For Those that Follow” — Area X, which also contains two featurettes — “Shimmer” and “Vanished into Havoc” — and lastly, “To the Lighthouse,” which includes “Unfathomable Mind” and “The Last Phase.”

In other release news from Paramount Home Media this week, the long out of print ten film collection celebrating the films of the late Jerry Lewis from the 1950s and ‘60s, will be available once again on June 12.