Special Report: 100-Day Window Will Be Cracked On June 12

The 8 ½ by 11-inch format of The DVD & Blu-ray Release Report (published as a pdf file) doesn’t lend itself to graphs with long views.   You get to see the “trees” each week (two year snap-shots) and not the “forest.”   Hence this special edition, which presents a ten-year view of ARR trends … and it is enlightening.

Forty-eight times per year, on a weekly basis, The DVD & Blu-ray Release Report is published, with this week’s up coming edition being No. 1,102.   So, we’ve been doing this for sometime now, but history is about to be made with the 52-week ARR average moving to under 100 days.   This will happen on June 12.

That sounds ominous … the Wolf-Biederman comet will strike the earth on June 12 and life as we know it will come to an end!

OK, OK, maybe not serious, but certainly worth a discussion. 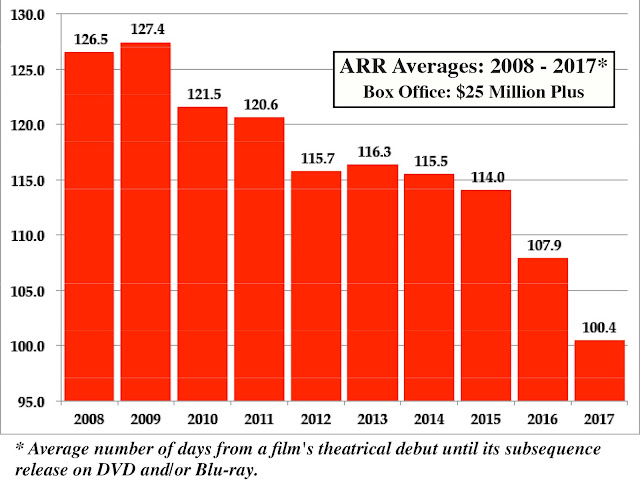 First, a little set-up (the methodology) as to exactly what “history” is about to be made on June 12 … and more importantly why it might just be a red line for some entertainment industry players.

Each week in The DVD & Blu-ray Release Report there are charts and graphs covering release configurations (types of, count, by year, etc.), plus there is a weekly survey of what has just been announced and what has just hit the streets in terms of new theatrical releases.   This segment of the home entertainment packaged media arena, even though “New Theatrical” accounts for only five percent of all DVD and Blu-ray SKUs released, is important as these new theatrical arrivals, especially hit theatrical films, drive the market.

Coverage of “New Theatrical” is lumped into two groups.  Those films with a box office take of $10 to $25 million and those with domestic box office grosses in excess of $25 million (the key to the industry).   There is a separate chart published each week for these two classes of film releases as to what is in the pipeline.

One other point, “New Theatrical” is defined as films released from 1997 on.   1997 wasn’t a random year picked out of a hat, it was the launch year of the DVD format, so the measurement of how quickly a film moves from its theatrical rollout to its subsequent release on DVD — the “window” — seemed like an important statistic to track.

We even gave this measurement a fancy name, as “window” didn’t seem all that snazzy.   After thinking about it for a while, Asset — which is what new theatrical releases really are — and Rollover Rate (speed to market) were combined and shorthanded to simply ARR.

Each time there is an editorial write-up on a new theatrical release in the report, there is always a reference to this number … such as: “The ARR works out to 95 days … etc., etc.”
It is a quick and easy way to measure the “window” between a film’s theatrical opening and its subsequent move to the home entertainment marketplace.

Since 1997, a weekly file has been maintained and updated tracking all new theatrical releases.   Once a film — regardless of the box office gross — is announced for DVD, Blu-ray or 4K Ultra HD release, the street date is entered and the ARR is automatically calculated.

Plucked from this database are those films with a domestic box office take of $25 million or more.   To fall into that group and generate that level of ticket sales, a film must have three things going for it.   These include a national release with sufficent screens to generate traffic, a P&A campaign to create awareness and enough consumer acceptance (often word of mouth) to keep the film in theatres long enough to generate a critical mass.

If a film under-performs during the first weekend, exhibitors are quick to move it down the hall and into smaller multiplex screens during the second week … and then gone.

This is one reason why The DVD & Blu-ray Release Report monitors the next level down — $10 to $25 million performers — as they often have decent theatrical breaks with a campaign behind them, but fail to achieve consumer acceptance.

Each week there are two new up dated charts produced featuring the top tier of new theatrical releases.    One monitors studio performance (a ranking of how fast they are moving their hit films) and the second shows the overall ARR trend, which is presented as 13 week (quarterly) and 52 week (annual) moving averages.

This brings us to the potential “red line” news.   Sure, it sounds like we have done a terrific job of burying the lede, but without an understanding of the methodology employed, the news itself might not have any contextual meaning. 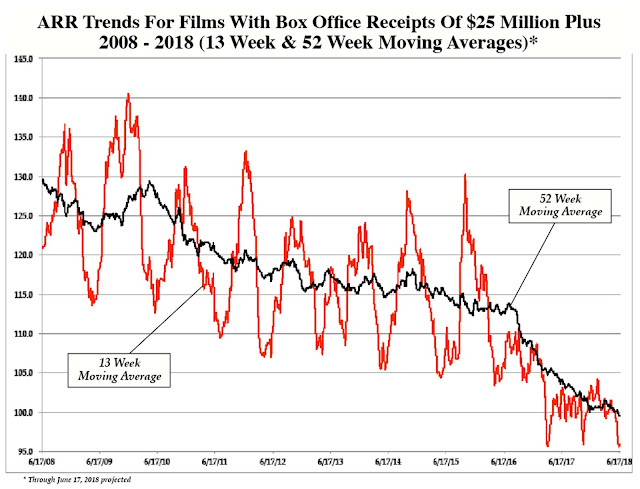 The larger graph of these two ARR trend lines — 13 weeks and 52 weeks — clearly shows the trends in a more visual way than can be accommodated in the weekly edition of the report.

In mid-December the annual average came right down to the line at an ARR of 100.1 days and then bounced off it.   It seemed that the studios — collectively — recognized that maybe, just maybe, that’s an equilibrium that should not be breeched and held the line for going on six months … until this week’s announcements, which, not in and of themselves individually, push the ARR average below the 100-day mark.

The first thing that you will notice is the wild 13-week moving average swings.   Summer theatrical hits opening in June, July and August have been traditionally held back until the retail Christmas-selling season.   There is no reason to rush a monster to market when unit sales can be maximized during the Thanksgiving to Christmas shopping window.   That is rational and reasoned economic behavior.

The other end of the spectrum are Thanksgiving and Christmas blockbusters, plus Q1 new theatrical releases, which are pushed as quickly to market as can be to have them available at retail before Memorial Day and the official kickoff of summer.

These wild swings are clearly visible in the “forest” chart, but don’t have the same impact with the weekly “tree” chart.

The 52-week moving average shows a steady drop from the summer of 2010 until post-Labor Day period of 2016.   Roughly speaking, two weeks were shaved — systematically — off of the ARR moving average during this extended period.

A dramatic change occurred in the fall of 2016, which has resulted in another two weeks being cut from the ARR average in just 18 months — this is an obvious sea-change in the trend.

It is not the purpose of The DVD & Blu-ray Release Report to make a judgment on whether this is a good thing or a bad thing … or perhaps, nothing at all.   But it does appear to be a trend that will likely have an effect on the marketplace, either now, or very soon.

How much heat can exhibitors stand before they crack?   And it is not just exhibitors who feel the flames of digital … the studios have a home entertainment packaged media business that is also being pressured by these ever-shortening release windows.

Right now exhibitors are flush with the arrival of new pre-summer and summer blockbusters, so like the frog in the pot being slowly brought to a boil, they may not take notice of the potential peril that they are faced with.

Theatrical exhibition has been the traditional economic model for launching film productions.   A studio ponies up production and P&A funds, makes a big deal (or little deal) about the stars and the story and the director … or the significance of a film.   They find the PR hook and run with it.   And then everything flows out from there.

As my distribution brethren were quick to point out when I was running home entertainment marketing at Metro-Goldwyn-Mayer, “home video is an ancillary market … without us, you have no business.”

Is there a number that is too quick?   Or, does the ARR annual trend line simply point to the way things are and exhibitors will have to adjust to each new reality?   Perhaps a day will come — and maybe sooner than anyone expects — when someone like, oh say, Adam Aron, the president and CEO of AMC Theatres, calls together MPAA studio members and utters the same words, “without us, you have no business.”   What will be their collective reply?   “Seen the trend lines, lately?”

Email ThisBlogThis!Share to TwitterShare to FacebookShare to Pinterest
Labels: DVD and Blu-ray Release Report, Special Report: 100-Day Window Will Be Cracked On June 12