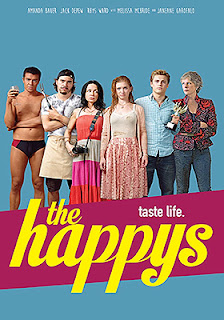 Indican Pictures announced this past week that the writing and directing team of Tom Gould and John Serpe’s debut feature film, The Happys, will be making its way to the DVD marketplace on May 1.

The knee-jerk upon hearing that a couple of guys have made a small-budget movie that has gotten distribution is, “oh, wow … another indie film on DVD.”  For the most part that is true, people are making films at a helter-skelter pace these days, which makes for a lot of “filmmakers,” but it doesn’t mean that they know what they are doing.   Tom Gould and John Serpe are the exception, they’ve learned the craft from the ground-up — Gould has been a film editor for over 15 years and Serpe has been an actor and writer for going on 20 years.

This experience — this “learn the trade” experience — shows in the lighting, the editing and general craft of the film (and we are not even talking about the acting or the story as of yet).   The final product belies its modest budget, which will make The Happys a welcome addition to anyone’s viewing list — in fact, it’s up against Peter Rabbit, 12 Strong and Winchester on May 1, which are all major studio releases, but The Happys from Indican Pictures can easily stands its ground with all three.

As to the story, think along the lines of writer/director Gary Ross’ 1998 film, Pleasantville and Reese Witherspoon’s character.  Tracy (Amanda Bauer — The Myth of the American Sleepover) is a perky, trapped-in-a-1950s-sitcom sort of girl, who wants to live with her boyfriend in her own perfect little Pleasantville.   Her boyfriend, Mark (Jack DePew), is a would-be actor, who has left Wisconsin behind to find fame and fortune in Hollywood, well, actually the two live nearby in the Las Feliz area of Los Angeles ... but close enough.   That’s your set-up, perfect pastel-and-flowers-girl-next-door and her soon to be famous boyfriend.   Perfect in every way.

Now you wouldn’t have much of a movie — or story to tell — if things were left like that.   So, Tracy comes home one day and finds Mark cheating on her … with another man!!!   Cut to phone conversation with her sister back in Wisconsin: “Trust me, you don’t want to come back home,” so Tracy decides to stick it out.

Her solution is that they will get married, she’ll cook him wholesome dinners and keep a spit-spot home and things will be just fine.   Even his tough-as-cinderblocks agent, Krista (Melissa McBride — as Carol in The Walking Dead television series), thinks that’s a good idea (or expedient) … she doesn’t want to get her client typecast.

Of course Tracy soon discovers that this is a quick and easy path to an absolutely miserable life.   Which brings us to the body of the story and the fun that is to be found in The Happys.   She decides to explore her Las Feliz neighborhood — which literally translates from Spanish to English as “The Happys” — and soon gets to know entrepreneurial landlord Luann (played by Janeane Garofalo), a former child actress who invested her money wisely by buying lots of homes in the Las Feliz area.   She acts as sort of a Greek chorus … full of information and wisdom, ever so wise in the way of “The Happys” and the quirky characters that reside therein.

Nice writing and nice comedy bits that lead us, and Tracy, to the local Mexican roach coach run by Ricky (Arturo del Puerto).   There’s chemistry between them, but it won’t last as Ricky is going to throw in the towel on his meals-on-wheels business … he’s just not very good at it.   But wait!   Tracy just might have a solution that could make Las Feliz a perfect little paradise for all.

The Happys is a nice romantic comedy, with some terrific insights on the business of “Hollywood” as a bonus … a solid debut effort from filmmakers Tom Gould and John Serpe.

In other release news from Indican Pictures this week, Apr. 24, will mark the DVD debut of writer/director Thomas Baldinger’s screwball-like comedy, Who’s Jenna?. 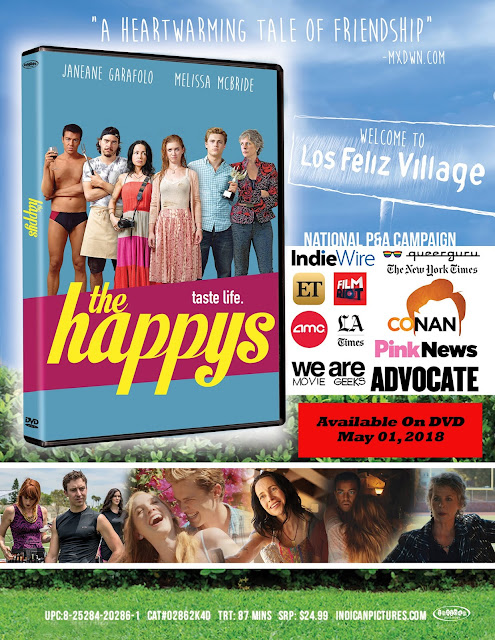 Email ThisBlogThis!Share to TwitterShare to FacebookShare to Pinterest
Labels: DVD and Blu-ray Release Report, Indican Pictures To Release The Writing/Directing Team Of Tom Gould And John Serpe's The Happys On DVD On May 1