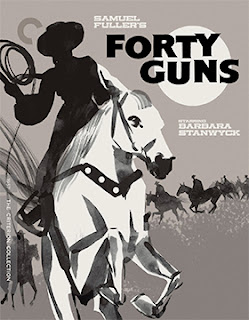 The filmmaking talents of auteur filmmaker Samuel Fuller will be showcased by the Criterion Collection on Dec. 11 with a new 4K restoration of his 1957 Western, Forty Guns.   Both DVD and Blu-ray editions will be available.

Tombstone, Arizona is the backdrop for this out-of-the-ordinary Western starring Barbara Stanwyck as Jessica Drummond, the local power — actually her, that is, and her 40 hired guns.   Her brother, Brockie, played by John Ericson, is a bully and a general all around sleeze who likes the cowardly approach to violence.

Into this hornet’s nest ride the Bonell Brother, Griff (Barry Sullivan), Wes (Gene Barry) and Chico (Robert Dix), who are Federal deputies armed with an arrest warrant for one of the local lawmen, who doubles as a stagecoach robber.   Before you can say “hand’s up,” Griff encounters Brockie and tosses his weasel butt in jail for shooting Marshal Chisum (played by Hank Worden), who is half-blind.   It doesn’t take too much imagination as what is going to happen next.   When your little brother is in jail and you have 40 gunslingers at your disposal, you don your best black Western outfit, saddle up and ride to town.

Meanwhile, Wes falls in love with a local gunsmith by the name of Louvenia (Eve Brent) and makes plans for a wedding … a tragic wedding to be sure.

Forty Guns brings together a top-notch cast, a script that doesn’t follow “the code,” amazing visuals (cinematography by Joseph F. Biroc — Oscar-winner for The Towering Inferno and also nominated for his work on Hush...Hush, Sweet Charlotte) and at least two scenes that stick with you long after the viewing — the wedding sequence and a magnificently-staged shootout between Griff and Brockie that is nothing short of stunning … one of those OMG screen moments! 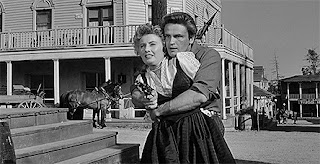