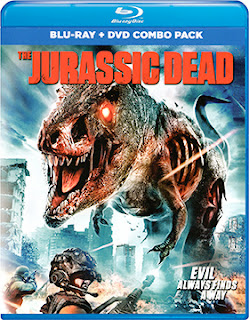 When a direct-to-video release hits DVD that is usually the end of the story.   But one year after Wild Eye Releasing send director Milko Davis’ The Jurassic Dead to market on DVD there is news that this stop-motion gem is heading to Blu-ray.

Wild Eye Releasing, with sales and distribution expertise provided by MVD Entertainment Group, has tabbed May 14 as the street date for a Blu-ray/DVD edition of this dino-winner.

There are a couple of ways to go about bringing a T-Rex to life on screen.  Old school (think: King Kong of the 1930s) is stop-motion, while “state-of-the-art” is CGI (computer generated).   Stop-motion is cool, CGI can be overwhelming … both work.

Milko Davis, working with co-director Thomas Martwick, served up this old school stop-motion gem involving a crazed scientist who has developed a zombie-like dinosaur.   A story like that can go south in a hurry, but this one works … and the new Blu-ray is testimony to just that!

The Jurassic Dead works as both a classic sci-fi mad scientist tale and as an entertaining adventure that mixes zombie and dino sub-genres.   If you don’t already have the DVD, check out the Blu-ray on May 14.