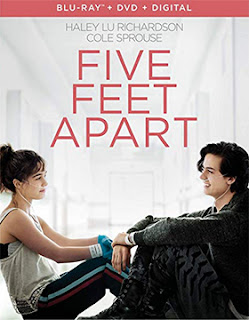 The ARR is 88 days and domestic multiplex revenues churned up a tasty $45 million.

Stella (Haley Lu Richardson — Edge of Seventeen, Columbus) suffers from cystic fibrosis and sure enough she meets fellow “CF” patient Will (Cole Sprouse — as Patrick in the Grace Under Fire series and Cody in The Suite Life of Zack & Cody) and they fall in love.   It is a doomed romance as they must remain at least six feet apart — but they cheat and drop the distance down to five feet — or they could cross-infect one another and die sooner than anticipated.

Bonus features for this box-of-Kleenex love story include commentary from actor-turned-director Justin Baldoni (his theatrical directing debut), deleted scenes, an alternate ending, footage from the film’s “Theatrical Fan Event” launch and a quartet of featurettes — “Crossing It Off: Making Five Feet Apart,” “On the Set of Five Feet Apart,” “Attention to Detail” and “An Artist's Eye.”