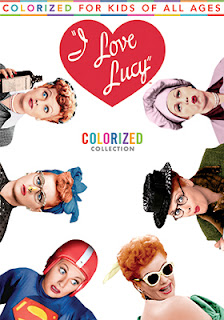 Paramount Home Media and CBS Home Entertainment will be celebrating Lucille Ball’s birthday on Aug. 13 (officially 108-years-young on Aug. 6) with the release of a five-disc DVD collection showing all 16 colorized I Love Lucy episodes.

The I Love Lucy: Colorized Collection is also being promoted by Fathom Events on Aug. 6 with a nationwide theatrical event that features five of the colorized episodes.

A sampling of some of the episodes included in the collection are: “Job Switching,” which fans know and love as “Lucy and the Chocolate Factory,” “The Million Dollar Idea,” (trying to market a secret family recipe turns into a disaster when every unit sold loses money), “Pioneer Women” (turn out the lights as Lucy and Ethel take on Ricky and Fred in a test of wills), “Lucy Does a TV Commercial” (Lucy does a TV commercial for Vitameatavegamin) and “L.A. at Last!” (William Holden and the Brown Derby will never be the same).