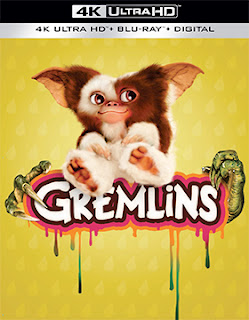 You are warned, don’t get them wet … and whatever you do, don’t feed them after midnight!!!

Warner Bros. Home Entertainment announced this past week that the 35th Anniversary of director Joe Dante’s horror tale (with loads of humor), Gremlins, will be celebrated on Oct. 1 with the debut of a 4K Ultra HD/Blu-ray Combo Pack edition.

Additional bonus nuggets with the 4K Ultra HD/Blu-ray Combo Pack edition of Gremlins are two motion comics — “The Last Gremlin” and “Gremlins: The Gift of the Mogwai” — additional scenes (with commentary) and four featurettes — “Gremlins: Behind the Scenes,” “Cute.  Clever.  Mischievous.  Intelligent: Making Gremlins,” “From Gizmo to Gremlins: Creating the Creatures” and “Hangin’ with Hoyt on the Set of Gremlins.”
Posted by DVD & Blu-ray Release Report at 5:23 PM